Taxi Firm Saves Over €79,000 By Switching To Nissan Electric 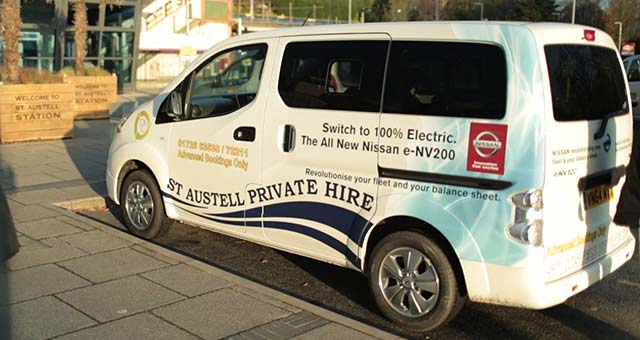 Just over 18 months ago, the St. Austell-based taxi company purchased its first Nissan LEAF to see how an electric car would cope with the high-mileage demands of private hire work. Nissan has released a video showing how, just a year and a half on, the cost savings have been so dramatic that the firm has purchased five more Nissan LEAF electric cars and has just taken delivery of its first Nissan e-NV200 Combi, an electric people carrier.

C&C Taxis is a member of the innovative Nissan e4Business programme, which helps small and medium size businesses across Europe to maximise their potential and keep their costs as low as possible, introducing them to the benefits of incorporating Nissan EVs into their company fleets and business models.

The pioneering taxi company has installed two quick chargers in the town, one at its office and one in an industrial estate to allow the drivers to maximise their driving time. The specially designed chargers replenish the battery from zero to 80 percent in just 30 minutes. The quick charging capability has meant that one of the Nissan LEAF taxis on the fleet has clocked up over 77,000 miles (123,000 km) in just 12 months.

C&C calculate each Nissan LEAF or e-NV200 it adds to its fleet saves the company €11,374 (£8,500) per year, per car on fuel alone. After the positive experience with the Nissan LEAF, C&C was anxious to add the new all-electric Nissan e-NV200 Combi to its fleet as soon as it was released, with Fleet Manager Mark Richards commenting: “We have had such a positive experience with our Nissan LEAF fleet, even the drivers, who were anxious to start with are now very happy to drive a 100 percent electric car. They tell us a 10 hour shift is less tiring with an EV and the e-NV200 we have now means we can extend that experience to the drivers who were previously in diesel minibuses.”

C&C Taxis is one of a growing number of businesses across Europe that is embracing the benefits of using Nissan EVs in its company fleet. Taxi Electric in Amsterdam was the first private taxi service to switch to a fleet of 100 percent electric taxis in November 2011. Since then, others from across Europe have joined the EV revolution, with the Nissan LEAF and e-NV200 now being used by taxi businesses in Lisbon, Amsterdam, Newcastle, Barcelona, Madrid and Rome.