Nissan Brings No Charge to Charge Program to Indianapolis 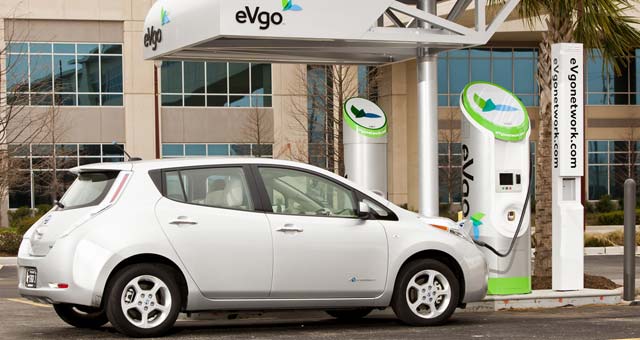 Nissan is now bringing its popular “No Charge to Charge” program to Indianapolis, providing two years of no-cost, public charging to new Nissan LEAF buyers within the Greater Indianapolis market.

Nissan formed a partnership with an unlikely ally in its effort to get drivers to kick gas and drive electric – Ricker’s. With the help of the Greater Indiana Clean Cities Coalition, Nissan teamed with the Indianapolis-based operator of fuel and convenience stores to install fast charging stations for electric vehicles at nine Ricker fueling stations spread across Central Indiana, the largest city-wide deployment of EV chargers at a chain of fueling stations in the U.S.

“Indianapolis has quickly become a very EV-friendly market, thanks to the efforts of Ricker’s and local leaders like Mayor Ballard,” said Brendan Jones, Nissan’s director of Electric Vehicle Sales and Infrastructure Deployment. “With chargers now conveniently placed throughout Metro Indianapolis, owners can enjoy even more all-electric miles in their quiet, fun-to-drive Nissan LEAF.”

Indianapolis is now the 14th market in the U.S. where Nissan has launched “No Charge to Charge” program. With “No Charge to Charge,” customers who purchase or lease a new Nissan LEAF beginning on April 1, 2015, will enjoy complimentary charging at these nine Ricker’s locations, plus three additional stations at Indianapolis-area Simon Property malls.

Indianapolis Mayor Greg Ballard has led the charge to bring more electric cars to the city. In addition to championing an all-electric car sharing service, Ballard signed an executive order making Indianapolis the first major city in the United States to pledge to convert its entire municipal non-police fleet to electric or plug-in hybrid vehicles by 2025. The city’s plug-in fleet – which includes the all-electric LEAF – now numbers more than 100, with plans to add 325 additional plug-in vehicles in 2015.

“In Indianapolis, we are taking bold steps to reduce our city’s oil dependence,” Mayor Ballard said. “Growing our citywide network of EV charging stations is important as we transition the city’s entire fleet off foreign oil and work with residents to increase their access to electric vehicles.”

“We are pleased to support private sector partnerships like the one between Nissan and Ricker Oil,” said Tristan Vance, Director of the Indiana Office of Energy Development and Chief Energy Officer for the State. “We are open to and grateful for opportunities that provide increased options for Hoosiers. Privately funded projects like this that support Indiana consumers are important drivers behind an energy policy that seeks to utilize all of Indiana’s energy resources.”