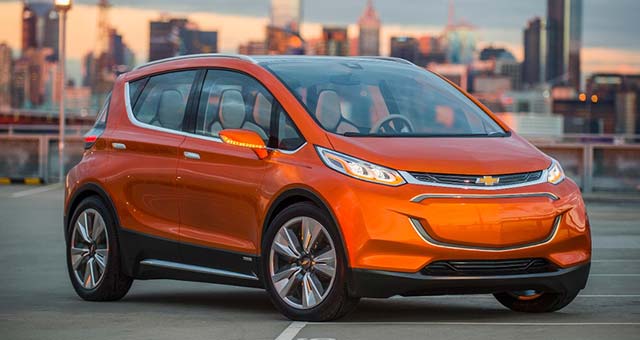 General Motors this morning confirmed production of its next-generation pure electric vehicle, based on the Chevrolet Bolt EV concept. It will be built at General Motors’ Orion Assembly facility near Detroit.

GM North America President Alan Batey made the announcement ahead of the Chicago Auto Show. The Bolt EV concept was introduced last month at the North American International Auto Show in Detroit.

“The message from consumers about the Bolt EV concept was clear and unequivocal: Build it,” said Batey. “We are moving quickly because of its potential to completely shake up the status quo for electric vehicles.”

Leveraging the industry-leading battery technology found in the Chevrolet Volt and Spark EV, the Bolt EV concept was developed as a game-changing, long-range pure electric for all 50 states, designed to offer more than a GM-estimated 200 miles of range at a target price of around $30,000.

The progressively styled concept vehicle features selectable driving modes for preferred driving styles, such as daily commuting, and it was designed to support DC fast charging.

“We’re proud that Chevrolet has decided to produce the Bolt EV here in Michigan at the Orion Assembly facility,” Gov. Rick Snyder said. “Michigan unquestionably remains the global automotive leader. Chevrolet is tapping a skilled workforce that includes some of the most talented and hard-working people in the world for this cutting-edge vehicle. Chevrolet is an important part of our state’s automotive history, and Michigan-made products like the Bolt EV point to a bright future as well.”

Start of production and additional details will be announced later.

GM’s Orion Assembly, home of the Chevrolet Sonic sub-compact and Buick Verano luxury compact,  and Pontiac Metal Center facilities are receiving a $200-million investment to support production of the next-generation electric vehicle. Orion will receive $160 million for tooling and equipment, and Pontiac will receive $40 million for new dies.

“As one of the most environmentally progressive facilities in GM’s global network, Orion Assembly is uniquely suited to build this game-changing electric vehicle,” said Doug Hanly, Orion Assembly and Pontiac Metal Center plant manager. “In partnership with UAW Locals 5960 and 653, we’re committed to building the highest level of quality into it.”

Located approximately 30 miles north of Detroit, Orion Assembly is powered by gas from two nearby landfills, which saves more than 6,300 tons of CO2 from entering the atmosphere annually. It is also home to a 350-kilowatt solar array that produces the energy equivalent to power 165 homes and sends enough energy back to the grid to power about 45 homes.

“This is very exciting for our members who were facing the possibility of losing that plant during the auto crisis,” said UAW Vice President Cindy Estrada, director of the union’s GM Department. “Our members are also proud to have their plant chosen to produce what is sure to be another popular and dynamic Chevy product rolling off the line at the Orion Assembly Plant.”

Orion Assembly is the first GM facility to receive the Clean Corporate Citizen designation by the State of Michigan, and the Pontiac plant has earned the U.S. Environmental Protection Agency’s ENERGY STAR® Challenge for Industry three times.