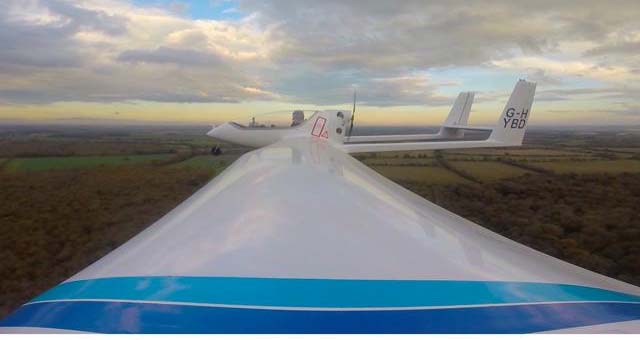 Researchers from the University of Cambridge, in association with Boeing, have successfully tested the first aircraft to be powered by a parallel hybrid-electric propulsion system, where an electric motor and petrol engine work together to drive the propeller.

The demonstrator aircraft uses up to 30% less fuel than a comparable plane with a petrol-only engine. The aircraft is also able to recharge its batteries in flight, the first time this has been achieved.

The demonstrator is based on a commercially-available single-seat aircraft, and its hybrid engine was designed and built by engineers at Cambridge with Boeing funding support.

The aircraft uses a combination of a 4-stroke piston engine and an electric motor / generator, coupled through the same drive pulley to spin the propeller. During take-off and climb, when maximum power is required, the engine and motor work together to power the plane, but once cruising height is reached, the electric motor can be switched into generator mode to recharge the batteries or used in motor assist mode to minimise fuel consumption. The same principle is at work in a hybrid car.

“Although hybrid cars have been available for more than a decade, what’s been holding back the development of hybrid or fully-electric aircraft until now is battery technology,” said Dr Paul Robertson of Cambridge’s Department of Engineering, who led the project. “Until recently, they have been too heavy and didn’t have enough energy capacity. But with the advent of improved lithium-polymer batteries, similar to what you’d find in a laptop computer, hybrid aircraft – albeit at a small scale – are now starting to become viable.”

The hybrid power system in the Cambridge demonstrator is based on a Honda engine, in parallel with a custom lightweight motor. A power electronics module designed and built in the Engineering Department controls the electrical current to and from the batteries – a set of 16 large lithium-polymer cells located in special compartments built into the wings. The petrol engine is optimally sized to provide the cruise power at its most efficient operating point, resulting in an improved fuel efficiency overall.

While the Cambridge demonstrator is an important step in the development of hybrid or fully-electric aircraft, more research is required before commercial airliners will be powered entirely with electric motors. For example, if all the engines and all the fuel in a modern jetliner were to be replaced by batteries, it would have a total flying time of roughly ten minutes.

Test flights for the project took place at the Sywell Aerodrome, near Northampton. These tests consisted of a series of ‘hops’ along the runway, followed by longer evaluation flights at a height of over 1,500 feet.

The Intergovernmental Panel on Climate Change (IPCC) estimates aviation is responsible for around 2% of global man-made carbon dioxide emissions. The aerospace industry made global commitments to take action that will see carbon neutral growth from 2020 and a net reduction in CO2 emissions of 50% by 2050 compared to 2005 levels.