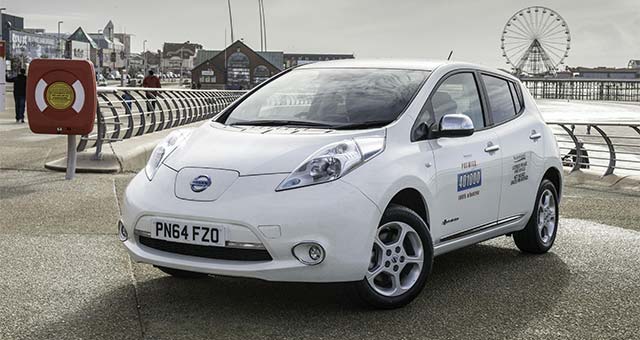 According to its scientists’ calculations, more than 740,000 electric cars were on the road worldwide in early 2015. Some 320,000 vehicles were registered last year, enabling car battery suppliers to generate considerable revenue of around €2 billion euros. The Nissan Leaf, Tesla Model S and Mitsubishi Outlander Plug-In headed up the registration statistics in 2014.

The ZSW’s latest assessment puts the number of electric cars at around three-quarters of a million. The USA stood out among the countries with the highest absolute growth rates with another 117,000 cars powered by electricity, bringing the stateside count up to around 290,000, a 69 percent bump. The USA thus retained the no. 1 spot with the world’s biggest fleet of e-vehicles. 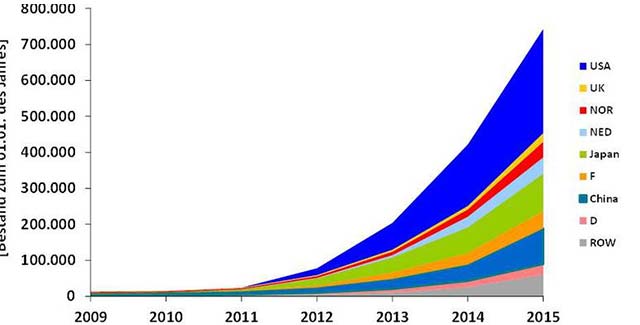 The figure for China also spiked with nearly 54,000 more electric vehicles bringing the count up to just short of 100,000, an increase of around 120 percent. China’s fleet puts it at no. 3, just behind Japan, where the 100,000 mark in electric cars has been exceeded, but at a relatively low growth rate of 45 percent.

What these leading countries have in common is that electric mobility’s upward trajectory is largely attributable to market incentives. China has even gone over to subsidizing domestically made electric vehicles exclusively, a move that underscores the importance of electric mobility to the country’s industrial policy. In contrast, a lack of market incentives has resulted in Germany taking just seventh place in absolute numbers (around 29,600 cars) and eighth in new registrations (around 11,700).

As in preceding years, Norway is living up to its reputation for pioneering this trend. The number of electric cars there rose 113 percent to a total of 43,400. Some 2.64 million automobiles are registered in the Scandinavian country, just over 1.6 percent of which are battery-powered, so electric mobility is a fixture of everyday life. Norway is the world leader measured by percentage share. By comparison, e-vehicles account for just 0.07 percent of all cars in Germany. 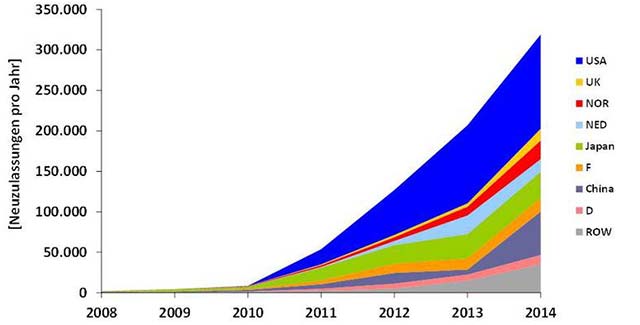 Models made by Nissan, General Motors, Toyota, Mitsubishi and Tesla currently lead the pack. According to ZSW’s figures, a total of 150,000 Nissan Leaf models have been registered since 2010. The number of GM’s Chevrolet Volt models out on the road today has increased to nearly 75,000, while more than 60,000 Toyota Prius Plug-Ins have been sold in the past five years. Tesla has moved some 50,000 of its Model S cars. Meanwhile, nearly 15,000 BMW i3s have changed hands worldwide, marking the first time a German carmaker has been able to post impressive sales figures with its e-mobility offering. This is all the more remarkable considering that the i3, in marked contrast to the aforementioned other models, has been on the market for just over one year. 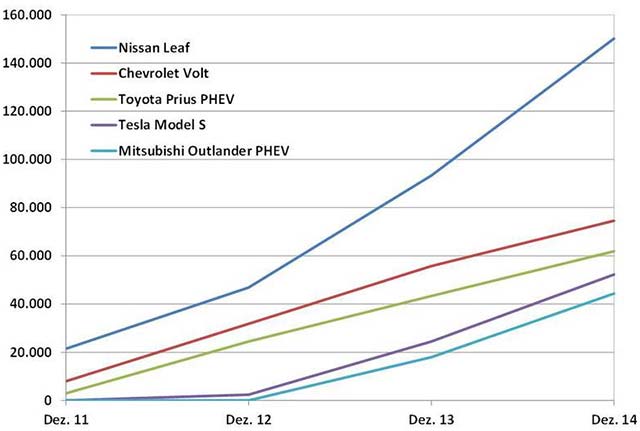 According to the ZSW’s assessment, the number of registered electric vehicles increased twofold every year from 2012 to 2014.

“If the momentum of recent years continues unabated, the number of electric cars worldwide will exceed one million in just a few months,” says Prof. Werner Tillmetz, a member of ZSW’s board of directors and head of the Electrochemical Energy Technologies division.

With 320,000 new registrations, manufacturers’ output has reached a level that is attracting a lot of attention from the supplier industry. Prof. Tillmetz, an expert in the field, points out that these sales figures would indicate that the market value of lithium-ion cells manufactured in 2014 comes to more than €2 billion. At the current rate of growth, this market will be worth around €15 billion by 2020. That’s when the pace of electric vehicle uptake will truly start to pick up steam.

“The German industry should continue to invest in the development of batteries and tenaciously strive to close the value chain. This way Germany will be able to keep up with the leading nations and seize its export opportunities in an international market with a bright future,” says Tillmetz.

The ZSW researchers based their calculations on figures sourced from the German Federal Motor Transport Authority as well government agencies and NGOs abroad. To this end, they tallied cars with batterypowered electric drives, range extenders and plug-in hybrids. They did not count motorcycles, trucks, buses or full and mild hybrid vehicles.