An Electric Car Conversion Doesn’t Have to be Ugly 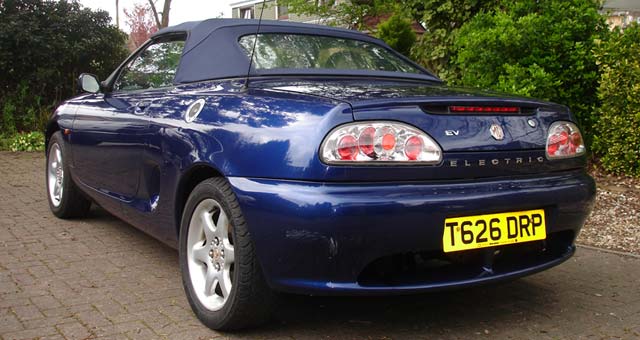 Although the big car manufacturers are doing a great job developing and popularizing the electric cars, I’ve always believed that it’s the conversions that really drove the idea of electric car out of obscurity. It’s the stuff like Feel Good Cars and ZE Beetle that gets people really hooked. One of the main obstacles for the electric cars to go mainstream is the public perception. The conversions is something that people can relate to, thus they begin to accept electric cars.

This story is about a very inspirational electric car conversion. It was done by a marketing guy proving that anyone can do it. Ok, ok, he’s got background in engineering but what I mean is that you can’t learn to build electric cars at a University. Meet Neil Hutchinson, he’s a marketing expert from Dorset, England and the man behind the Electric Power Classic Car club. A few years back he decided to convert his stunning blue MG sports car into an all-electric vehicle.

The conversion was done to a high standard and the vehicle is road-legal. It has participated in several events, most notably the Brighton to London Future Car Challenge. It’s like the famous historic London-Brighton Emancipation Run only the other way round and dedicated to green transport.

But when it comes to electric car conversions, the most important question is – was it all worth it? I think it was. The car’s progress was closely monitored and it covered the 57-mile journey using just a little over 13kWh of energy. In money terms it’s $2.10 to get from Brighton to London. Well, maybe the North American readers are not that impressed but it’s a great figure for England. It comes to 3.7 cents per mile which is 8 times cheaper than to cover the same distance using an internal combustion engine.

This also shows that electric cars are more economical than we tend to believe. The industry average electricity consumption is 0.25kWh per mile. The MG did better than that clocking just 0.229kWh per mile.

Only the best components were used in this conversion – a Siemens AC 3-phase motor, a Siemens controller, Li-ion batteries and a clever regenerative braking system. The conversion has cost an estimated $19,500 (not including the original vehicle cost and labor cost) but Neil reckons it will have paid for itself in some 5 years because he uses the car for commuting and the savings on petrol and road tax really add up quickly.

The thing I also like about private electric car conversions is that it challenges the mainstream car manufacturers. If you look at the Nissan Leaf or some other production vehicles out there – they’re ugly. They’re different. And they don’t have to be different. You don’t have to make the bodywork unattractive just to fit in the batteries.

This MG looks just like any other MG on the street, the ZE Beetle looks like any other classic VW. The beauty of conversions is that you can convert any vehicle. Rolls-Royce? Ford Truck? Range Rover? You bet! Talking of Range Rovers, there’s a company in the UK called Liberty Electric Cars ltd specializing in converting Range Rovers to all-electric operation. The limit is your imagination. A bigger car will need a bigger motor and more Li-ion cells but there’s really no reason why all electric cars have to be small and weird and I do hope it’s a lesson the big manufacturers will learn soon.

The images and data courtesy of Neil Hutchinson and epowercc.co.uk.[wzslider height=”400″ lightbox=”true”]