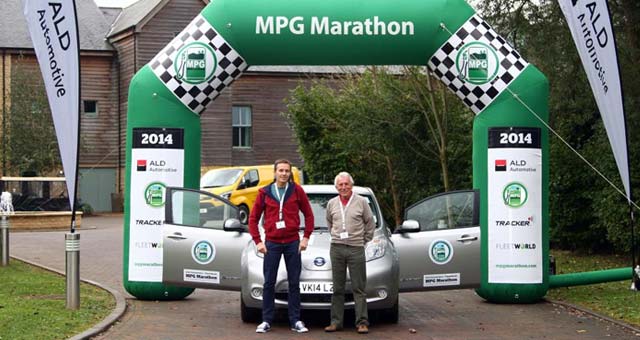 The electric vehicles taking part in this year’s MPG Marathon demonstrated how cost effective and reliable they were by completing the course in virtually the same time as their competitors – but by using less energy and with no pollution.

Three electric vehicles took part for the first time in the 23-team eco-driving event, which was again sponsored by ALD Automotive and TRACKER and was won by Honda engineers Fergal McGrath and James Warren, driving a Honda Civic Tourer and recording an outstanding 97.92mpg.

Like their competitors, they had to stop at set checkpoints en route, but were allowed to take scheduled rest time at recharging stops. This meant that careful route planning was essential to avoid range anxiety and ensure they had enough power to complete the course.

Ultimately it was a very close run thing and there was a photo-finish for first place with all three electric vehicles producing very similar results in terms of overall energy usage.

However, by a short head, the overall winner of the inaugural electric vehicle section was Jerry Clist, maintenance controller at ALD Automotive and co-driver Peter Thompson.

Driving a Nissan LEAF Acenta equipped with the upgraded 6.6kW on-board charger, Clist and Thompson recorded the highest economy at 5.0 miles per kilowatt hour of electricity consumed, and using the least energy overall at 68.9kwh for the 344 miles that they drove.

With the equivalent of 11kWh of energy in one litre of diesel, their performance equated to an astonishing 249mpg in a comparable diesel car, at a cost of just 2.6p per mile.

Close behind, were Rhys Harrhy, ProFleet2 product manager at ALD Automotive, and co-driver Peter Thomas, content and data manager at Next Green Car.

Driving an identical Nissan LEAF Acenta, the pair travelled an average 4.82 miles per kilowatt hour of electricity consumed, using a total of 69.9kwh for the 337 miles that they drove at a cost of 2.7p per mile.

The pair stopped at motorway service stations to recharge using, wherever possible, the available Ecotricity rapid chargers, which are currently free to use and powered by 100% renewable energy.

Like the team in second place, the pair also recorded an economy of 4.82 miles per kilowatt hour of electricity consumed, using 71.0kwh for the 342 miles that they drove at a cost of 2.7p per mile.

Afterwards, Alex Grant commented: “Even the most efficient diesel car in the event would have cost just over 6p per mile. That’s more than twice the cost of the electric vehicles taking part – and we had zero emissions and zero pollution into the bargain.”

Organiser Ross Durkin, managing editor of Fleet World who was presiding over the 14th MPG Marathon to date, said that the success of the electric vehicles taking part had fully vindicated their inclusion this year.

“We wanted to see for the first time whether electric vehicles could compete against conventionally-powered vehicles. Could they complete the same course, in a roughly similar time, without any worries over recharging and without any range anxiety for the drivers?

“The answer to all those questions was a resounding ‘yes’, and the  closeness of the results for the three electric vehicles taking part ably demonstrated their cost-effectiveness, their suitability for typical driving conditions and their minimal impact on the environment,” he said.

Day one saw the contestants start from the luxurious Cotswold Water Park Four Pillars Hotel, at South Cerney near Cirencester, and head for the Brecon Beacons, with a lunch stop in Abergavenny, Monmouthshire, and an afternoon tea stop in Worcester.

On day two, they again set off from South Cerney, heading for Andover in Hampshire for a coffee stop and a lunch stop at the stately Bailbrook House Hotel in Bath.

The electric vehicle contestants carefully selected their recharging stops along a mix of motorways and other classes of roads, while the two teams driving a Nissan LEAF also used the recharging points at the Wessex Nissan dealership in Gloucester.[wzslider height=”400″ lightbox=”true”]