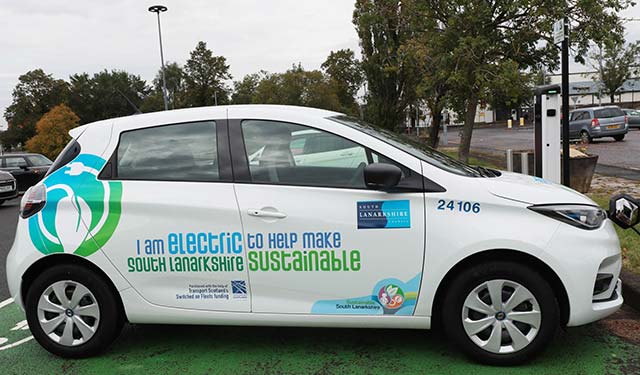 South Lanarkshire Council has taken delivery of 141 all-electric New Renault ZOEs, the order being the biggest ever placed for Renault Z.E. electric vehicles in Scotland and reaffirming the Council’s commitment to implementing low-carbon travel across its operations.

The majority of the vehicles will be utilised to switch the Council’s entire pool car fleet of 104 vehicles from diesel to fully electric power. The Renault ZOEs will be used by a wide range of personnel to travel throughout the Council’s 20 wards and sometimes further afield to complete site visits, attend meetings and training appointments. All this business travel will now be free of carbon dioxide and NOx emissions.

The remaining 37 Renault ZOEs will be deployed across a range of council services including Roads, Housing and Technical and South Lanarkshire Leisure and Culture. When in service the new arrivals will mean 28 per cent of the Council’s small fleet will now be fully electric.

Importantly, the Council hopes that by exposing so many of its personnel to the experience and benefits of driving an electric vehicle, they will themselves consider making the change from a conventional ICE vehicle to an EV. With each Renault ZOE sporting the same distinctive livery as the Council’s recently introduced new electric minibus and electric road sweeper, their use will also be a highly visible message to the public that the Council is leading by example in making the region a cleaner, healthier environment through the benefits of low carbon travel.

Funding for the New Renault ZOEs was made possible thanks to a grant of more than £1 million from Transport Scotland’s Switched on Fleets Programme.

The five-door superminis will be charged via charging points that are already installed throughout the South Lanarkshire Council estate, with the Council set to add more chargers in the near future.

South Lanarkshire Council considered several electric vehicles before opting for the award-winning Renault ZOE, which amongst its many accolades includes being named the ‘Best Small Electric Car’ at the What Car? Awards for seven years in a row. Factors that influenced the Council’s purchasing decision were availability, WLTP range of 245 miles and size, the ZOE enabling the Council to further streamline its travel thanks to having the space to comfortably transport four adults and any necessary equipment.

Another key reason was the long-standing relationship that South Lanarkshire Council already enjoys with the supplying dealer, Park’s Renault in Hamilton, and Groupe Renault UK. The order is the latest development in the 10 years that they have worked together and brings the amount of Renault vehicles on the Council’s entire fleet to 391.

Available from £26,495 OTR after the Plug-in Car Grant, the Renault ZOE has been extensively revised for 2020. Combining the best range in its sector with optimum value, the latest version continues the model’s award-winning success with the Renault ZOE recently voted the ‘Best Small Electric Car’ at the What Car? Awards for the seventh consecutive year.

Available in three levels of trim – Iconic, Play and GT Line – the ZOE offers a highly usable range of up to 245 miles (WLTP). With the 50KW DC rapid charge option, 90 miles of charge can be restored in only 30 minutes.

In addition to the award-winning ZOE supermini five-door hatchback, the Renault Z.E. range consists of the Twizy quadricycle, Renault Master Z.E. and Renault Kangoo Z.E.33 vans, plus the newly-launched Renault ZOE van, which combines the equipment and 245-mile range of the passenger car version with a versatile payload of 387kg (Business trim).