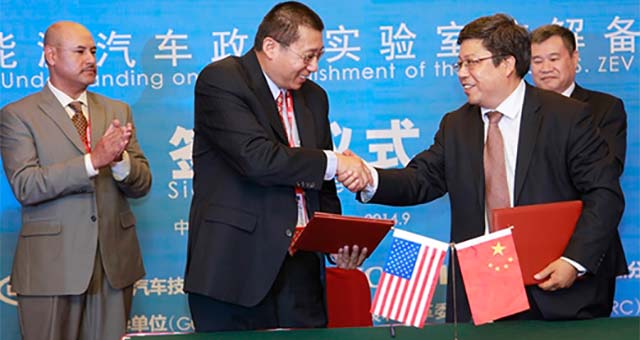 The University of California, Davis, and the China Automotive Technology and Research Center will work together to help speed the commercialization of plug-in and fuel cell electric vehicles in China and the U.S. under an agreement signed Sept. 6 in Tianjin, China.

The five-year memorandum of understanding establishes the China–U.S. ZEV Policy Lab, a partnership between UC Davis, the world’s leading university on sustainable transportation, and CATARC, the administrative body that oversees and regulates many activities of the auto industry in China, the world’s largest new-car market. Primary UC Davis partners are the Institute of Transportation Studies and the UC Davis Policy Institute for Energy, Environment and the Economy.

The California Air Resources Board, the world’s leader on clean vehicle policies, and the National Development and Reform Commission, a major Chinese government agency, have supported the agreement and will co-chair the new entity’s advisory board. Major international and Chinese automotive and energy companies will also be invited to participate.

The memorandum of understanding was signed during the 2014 International Forum on Chinese Automotive Industry Development.

The collaboration will help expand the global market for zero-emission vehicles, or ZEVs, by providing intellectual support for design of ZEV policies and analysis of consumer markets, including demand for charging stations, different types of ZEV technologies, and effectiveness of incentives. The China–U.S. ZEV Policy Lab will strengthen cooperation between California, the current leader in ZEV sales and the United States’ largest new-car market, and China, the global leader in new-car sales.

In addition to policy research and studies of consumer behavior, the China–U.S. ZEV Policy Lab will train advanced vehicle researchers and leaders in California and China, inform Chinese regional and central government officials on California’s ZEV and related vehicle policies, and exchange information between California and China regarding lessons learned.

ARB policies such as the ZEV and Advanced Clean Cars program and the groundbreaking Global Warming Solutions Act (AB 32) have informed government action around the world.

Signatories to the MOU include UC Davis Chancellor Linda P.B. Katehi and CATARC Director Hang Zhao. Yunshi Wang, director of the China Center for Energy and Transportation at ITS-Davis, signed the agreement in Tianjin on behalf of ITS-Davis, the UC Davis Policy Institute, and the Plug-in Hybrid & Electric Vehicle Research Center at ITS-Davis.

The lab will be led by ITS-Davis’ Wang and CATARC’s executive in charge of new energy vehicles, Deputy Director Zhixin Wu. Co-chairing the lab’s advisory board are NDRC’s Li and ARB Deputy Executive Officer Alberto Ayala, who was present at the signing.