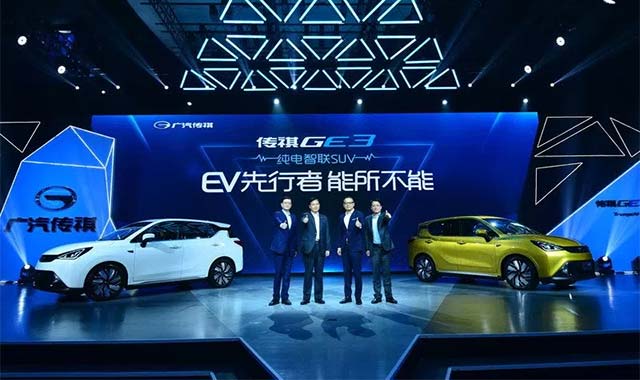 China has registered 181,200 plug-in passenger cars from January to June 2017, including imports, which makes it by far the largest market for Plug-ins (or New Energy Vehicles, NEV, as they are called in China).

Pure electric vehicles (BEV) were the clear winners, increasing 6 % in the mix to 82 % of all NEV sales. From 2017 onwards, central NEV subsidies are reduced by 20 %, local subsidies are cut by around 50 %. As expected, the increase over 2016 H1 is less than in previous years and stands at 42 %. The result was also influenced by the 54 % decrease in January, when delays, or outright refusals in subsidy approvals created confusion among consumers and OEM alike.

Non-Chinese brands stand for nearly 50 % of total passenger car sales, most of it produced in China, by J/Vs with Chinese companies. For NEV sales, non-Chinese brands stand for only 6 %, the lion share is from Tesla. Other foreign brands need to multiply plug-in sales in 2018 compared to 2016. And they need to be localised to receive subsidies and to avoid import duties. The alternative is acquiring emission certificates from over-achievers.

China leads in Cars and Buses

For the complete 2017, we expect passenger car NEV sales to reach 530,000 units, 80 % of them BEVs and 20 % Plug-in Hybrids (PHEV). China remains the largest market for Plug-Ins by a considerable margin, with over 90 % of sales from domestic OEM, China is also the largest producer of Plug-ins.

This reporting is for the passenger car market. In addition, over 190,000 commercial vehicles were sold in the NEV category in 2016. For 2017 we expect this number to reach 270,000 units, 80 % of them are large buses, most of them fully electric. For electric busses, 98 % of world sales are in China, today. The domestic sales leader is Yutong, the export leader is BYD.

Half of sales are small cars and minis

An important reason for the Chinese lead in NEVs is their success in offering ultra-affordable EVs in the Mini (A) and Small (B) segments. The Zhidou D1 EV is available at less than 100,000 RMB (12,500 Euro) after central and local subsidies, the BAIC EC180 costs around 160 000 RMB (20,000 Euro) after subsidies. This is still about twice a much as for a comparable, Chinese ICE car, but makes EVs accessible to a much broader consumer base.

Mid-sized (D) sedans are popular for mega city taxi services, compact and mid-sized SUVs are immensely popular among private buyers; Tesla is the leading brand for high-end NEVs in China. It can also be noted that there is only one PHEV among the segment best sellers, the BYD Tang. 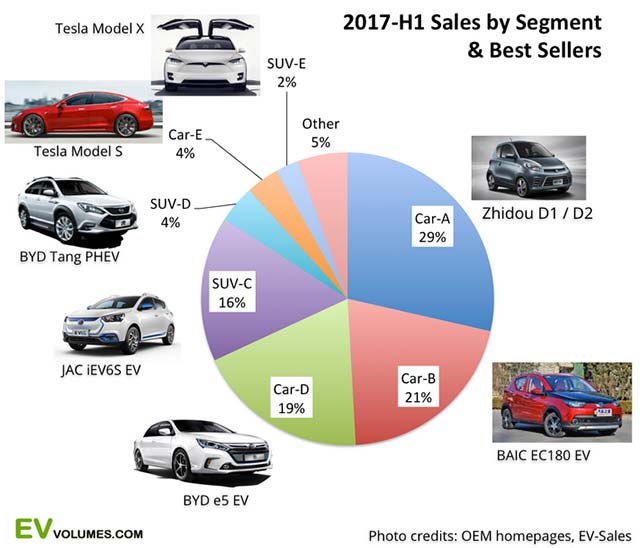 PHEV on the Retreat

The ranking for Q2 and the first half of 2017 is considerably different from the 2016 full year result, when BYD claimed places 1, 2, and 3. BYD was had a dismal start of the year, but, unlike most other brands, it did not quickly return to normal sales rates.

Another occurrence this year is the retreat of plug-in hybrids. From 2015 to 2016, their share in the EV/PHEV mix contracted by 10 % and in 2017 by another 6 %, now stating at just 18 %. More severe demands for receiving full subsidies, tougher mandates for all-electric propulsion in megacities and more BEV models with acceptable E-range are the main reasons behind this trend.

Even if the new plug-in hybrid SUVs from BYD, the Song and SAIC’s eRX5 became instant hits, the best-selling NEV in the compact SUV segment is a pure EV, the JAC iEV6S. BYD will soon answer with a BEV version of the Song.

Tesla finally took off, more than quadrupling sales in 2017, compared to H1 of 2016. With 9,650 sales of Model S and Model X combined, Tesla rose to 7th place in the OEM sales ranking, while most other imports all but disappeared from the top-30 list.

Chinese brands dominate the market. Imports brands stood for just 6 % of plug-in sales, some 15 import models sell on a regular basis and very few are China-sourced. The others pay custom duties and get no subsidies, which explains the struggle of plug-in imports in China. 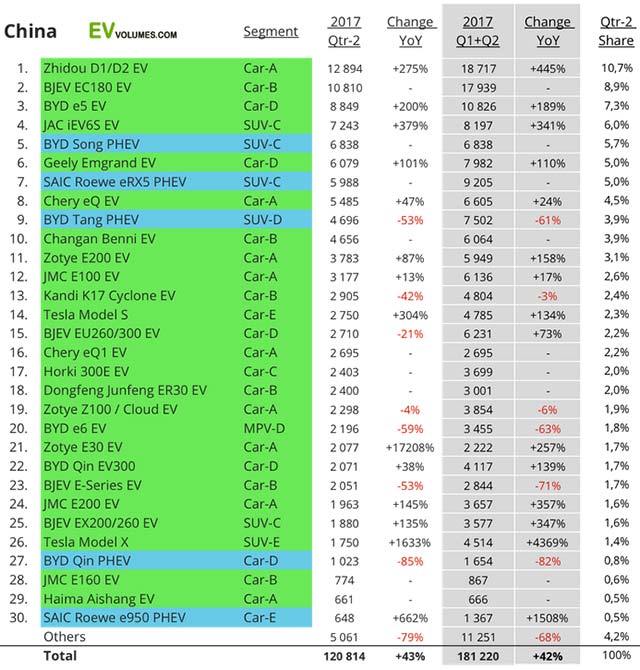 A series of policy changes for New Energy Vehicles had severe impact on the demand and supply situation during the second half of 2016 and the start of 2017. Now that production approvals and subsidies are likely kept through 2018, we expect the 2nd half of 2017 to follow a more normal share development, as in 2015. OEM have acted on reduced subsidies, with price adjustments and value improvements, often by larger batteries and longer E-range. Under these assumptions, the total NEV passenger car volume is trending towards a total of 530,000 units for the year. This corresponds to an average share of 2,1 % for 2017 and a volume growth of 51 % over 2016. December could see a peak share of 2,8 %.

Over One Million Plug-ins on the Road in China

An estimated 800,000 NEV passenger cars are in operation in China today. By the end of 2017, their number is likely to exceed 1.1 million, which puts China in the lead before USA and Europe. With around 175 million passenger cars in operation, their share is a mere 0,66 %, but higher than in other regions.

5 million NEVs on the road by the end of 2020 is a previously stated target of Chinese authorities. This is for all vehicle types combined, including LCVs, trucks and buses. With the current rates of NEV adoption, this target can be reached or even exceeded. 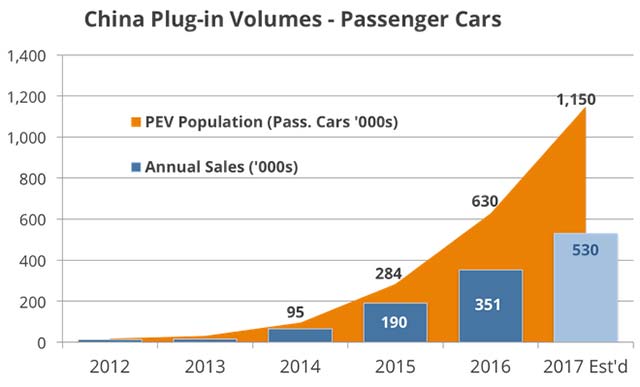