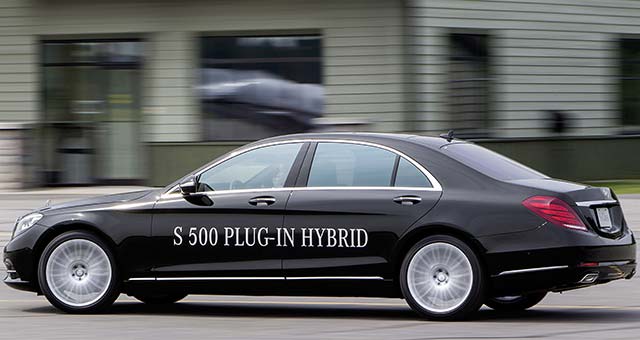 The all-new Mercedes-Benz S 500 PLUG-IN Hybrid will be offered in long wheelbase form and will cost from £87,965 on-the-road and is subject to a BIK rate of just five per cent.

First production of the S 500 PLUG-IN Hybrid starts next month with deliveries in the UK due in late November.

The S 500 PLUG-IN Hybrid can return 100.9 mpg, emits 65 g/km of CO2, can accelerate from rest to 62 mph in 5.2-seconds before reaching a limited 155 mph and yet is exempt from road tax and receives a 100 per cent discount on the London Congestion Charge.

Powered by a V6 biturbo petrol engine producing 333 hp and an electric motor developing 116 hp, the S 500 PLUG-IN HYBRID generates a total of 442 hp and 650 Nm of torque.

Despite this mighty performance, the S 500 PLUG-IN HYBRID can travel over 20-miles on purely electrical power.

Based on the steel and aluminium chassis structure of the conventional S-Class, the S 500 PLUG-IN HYBRID is the third Hybrid model in the line-up, following on from the S 300 BlueTEC Hybrid and S 400 Hybrid variants. Unlike its predecessors, the 8.7 kWh lithium-ion batteries in the S 500 PLUG-IN HYBRID can be topped up using external charging devices such as fast chargers.  A fullcharge on a typical public, three phase power point takes around two hours.

The technology in the S 500 PLUG-IN HYBRID is integrated to ensure as little energy as possible is wasted – the COMAND system looking ahead of where the car’s travelling to predict where energy can be recuperated, on downhill sections, for example. Likewise, the car will look to regenerate as much power as possible in advance of entering urban areas where the electric-only driving mode can be deployed.

Likewise, the car can, if desired, gently advise the driver on the most efficient driving style – sending a pulse through the accelerator to indicate when sailing mode can be engaged (shutting down the internal combustion engine) and the accelerator itself can be released, harvesting energy and boosting the range of the car. Likewise, the predictive gearshift strategy uses the car’s radar system to sense if there’s a car in front and alters the gearshift accordingly based on the likelihood that the driver will wish to overtake – improving efficiency as well as the responsiveness of the car when required.

As with any S-Class, the S 500 PLUG-IN HYBRID aims to set the benchmark in technology – both functional and comfort-orientated. For example, the new variant uses a tablet or smartphone-based system to allow you to pre-heat or pre-cool the car ahead of your arrival through the innovative Connect me system. The system can also remotely relay information to the driver when away from the car on the charge status, the predicted range and when the next service is due.

Comfort features available on the car include the choice of seven different ambient colours in which the interior is bathed, front and rear seats that can replicate a hot stone massage as well as either heating or cooling you, the ability of the left rear seat to recline to 43.5 degrees, seatbelt-mounted airbags, a perfume diffuser system called Air Balance that also cleans the air entering the cabin, gently heated armrests and Magic Body Control – which uses stereo cameras to read the road ahead and iron out any imperfections through making tiny alterations to the suspension system.