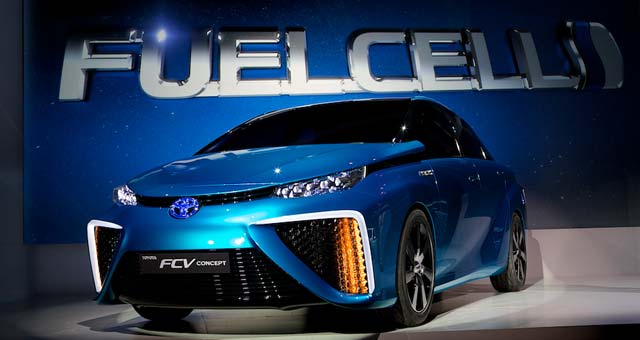 Hydrogen as a regenerative fuel produced in gigantic water tanks full of algae, which need nothing more than sunlight to produce the promising green energy carrier: a great idea in theory, but one that fails due to the vast amount of space required for the production process.

Scientists from the Max Planck Institutes for Chemical Energy Conversion and Coal Research) in Mülheim an der Ruhr, and from the research group Photobiotechnology at Ruhr-Universität Bochum (RUB) have now discovered a way of increasing the efficiency of hydrogen production in microalgae by a factor of five. If the algae can generate the fuel more efficiently, it can be produced in a smaller area and in quantities suitable for practical use. This approach also dispenses with the need for rare and expensive precious metals, which are used to split the energy-rich gas is technically from water.

Living organisms need electrons in many places, as they use them to form chemical compounds. Algae and other organisms which carry out photosynthesis release electrons from water with the help of sunlight and then distribute them in the cell. The ferrous protein PETF is responsible for this: It transports the electrons in particular to ferredoxin-NADP+ oxidoreductase (FNR), so that NADPH is formed and carbohydrates are finally synthesised from carbon dioxide. The production of hydrogen through hydrogenases is among the many other processes, for which PETF provides the necessary electrons.

Hydrogenases are very efficient enzymes that contain a unique active centre comprising six iron atoms, where the electrons supplied by PETF are bound to protons. Molecular hydrogen is produced in this way.

With the help of nuclear magnetic resonance spectroscopy, on which magnetic resonance imaging in medicine is also based, the scientists working with Sigrun Rumpel, a post doc at the Max Planck Institute for Chemical Energy Conversion in Mülheim, investigated the components of PETF – or more precisely amino acids – that interact with the hydrogenase and those that interact with FNR. It emerged that only two amino acids of PETF are important for binding FNR. When the researchers modified these two amino acids and the enzyme FNR, PETF was no longer able to bind FNR as efficiently. Thus, the enzyme transferred less electrons to FNR and more to the hydrogenase. In this way, the scientists increased the hydrogen production by a factor of five.

“For a technically feasible hydrogen production with the help of algae, its efficiency must be increased by a factor of 10 to 100 compared to the natural process,” says Sigrun Rumpel. “Through the targeted modification of PETF and FNR we have taken a step towards achieving this objective.” Up to now, the production of hydrogen from renewable energy carriers involved the electrolytic splitting of water. Expensive and rare precious metals like platinum are currently required for this purpose. Sigrun Rumpel and other researchers are therefore working on finding a way of enabling algae to efficiently produce the fuel. Microalgae produce the gas naturally, but in very small volumes. Thus, if cars were to be powered one day using hydrogen rather than petrol or diesel, to come anywhere near covering Germany’s fuel requirements, gigantic areas with tanks full of algal cultures would have to be set up.

“These results represent a path to the economically-viable regenerative production of fuels with the help of microalgae,” says Sigrun Rumpel. The change of electron transfer pathways could further improve hydrogen production in future. The researchers therefore now want to combine different modifications with each other.