Scandinavian Hydrogen Infrastructure Getting a Boost From Carmakers 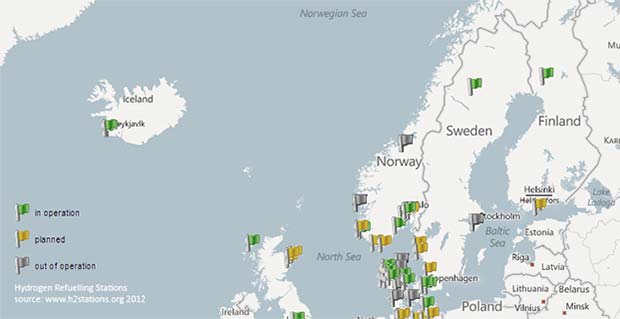 Toyota, Nissan, Honda and Hyundai signed a Memorandum of understanding (MoU) with organizations from the Nordic Countries on market introduction of fuel cell electric vehicles (FCEV) and hydrogen refueling infrastructure during the period 2014-2017.

The MoU will catalyze a dialogue with public and private stakeholders in Norway, Sweden, Iceland and Denmark on securing relevant financing and support mechanisms for accelerating the market introduction.

Car manufacturers have invested significantly in the development of FCEVs in the past decade. Alongside, infrastructure companies have continuously developed hydrogen production and refueling technologies and standards, in particular within the Nordic countries.

National network organizations within Iceland, Norway, Sweden and Denmark have actively worked for the establishment and planning of hydrogen refueling stations since 2006, under the Scandinavian Hydrogen Highway Partnership(SHHP). The infrastructure companies HYOP AS (Norway), H2 Logic A/S (Denmark) and others have invested significantly since 2006 in the opening of several hydrogen refueling stations within the countries and are actively preparing plans for countrywide networks beyond 2015.

The rich variety of renewable energy sources in the Nordic countries also provides a strong case for sustainable hydrogen production, which in turn can help storing and balancing even higher shares of fluctuating renewable electricity in the Nordic power grids.

Toward 2015 important steps and decisions have to be taken to ensure a successful market introduction. In particular the engagement of private stakeholders such as national energy companies and investors is key to realize the hydrogen infrastructure roll-out. Governments in turn should provide stable long term market conditions and mechanisms to foster a coordinated roll-out. The Nordic MoU will catalyze a dialogue among the central stakeholders on these topics.

The MoU partners will therefore specifically endeavor to cooperate on:

The MoU was signed in the presence of the Danish Minister for Transport and the Director of the International Energy Agency, directorate of Sustainable Energy Policy and Technology at the 3GF conference in Copenhagen.