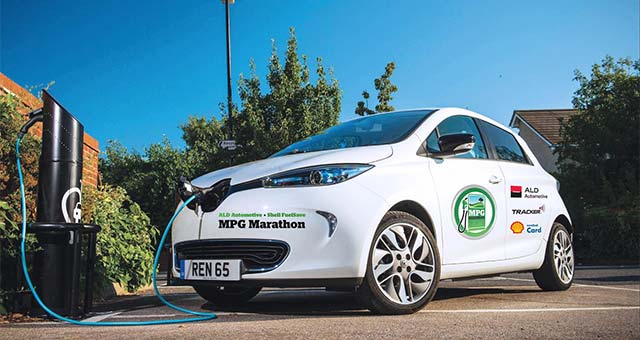 Electric vehicles will feature strongly in this year’s MPG Marathon for the first time – but the drivers will have to plan their recharging points carefully if they want to finish first in their class.

Pure electric vehicles are taking part alongside range extenders and plug-in hybrids for the first time in the famous eco-driving extravaganza, which is again being sponsored by ALD Automotive and Shell FuelSave and organised by Fleet World magazine.

The three new vehicle classes are joining the more familiar diesel and petrol engined cars and vans that traditionally take part in the event, which this year is being held in the picturesque Cotswolds and the rugged Brecon Beacons on Wednesday 8 October and Thursday 9 October.

Several electric vehicle entries have already been received. Fleet World’s own motoring editor Alex Grant has entered a pure electric Renault Zoe, while a team from leasing company ALD Automotive will be attempting the course in an all-electric Nissan Leaf.

They will have to make the best possible use of the recharging network housed at service stations on the 360-mile route, and will be judged on how much power they consume over the course.

Electricity will be measured at 13p per kilowatt hour, while any carbon fuel that the petrol or diesel hybrid vehicles consume will also be taken into account.

Event organiser, Ross Durkin, said: “This year’s MPG Marathon is showcasing the very latest developments in alternative fuelled vehicles, including pure EVs, range extenders and plug-in hybrids, for the first time. They will compete in their own class alongside the more conventional but increasingly fuel-efficient internal combustion engined models.

“As we cannot measure the mpg of the electric vehicles in the conventional way, we have devised a method of measuring the energy they consume in completing the course, based on a notional value of 13p per kilowatt hour for electricity used.

“Drivers will have to plan their recharging stops very carefully and at pre-identified recharging points to ensure they keep their EVs as fully charged as is practically possible.

“In doing so, they will be replicating the real life driving conditions that the growing number of fleet drivers who use EVs encounter every working day. It promises to be an interesting challenge,” he said.

This year’s MPG Marathon, now in its fourteenth year, will be based at the luxurious Cotswold Water Park Four Pillars Hotel near Cirencester, Gloucestershire. It will again set out to demonstrate that a combination of fuel-efficient cars, advanced fuels, route planning technology and eco-driving skills can be employed to successfully manage the rising cost of fuel.

The event is open to fleet managers, representatives from fleet services, contract hire and leasing and fleet management companies, and from the motor industry plus anyone associated with it.

In previous years, the UK’s most prestigious lean-driving challenge has attracted celebrities, motoring journalists, academics and senior figures from the automotive industry, all striving to see if they can complete the chosen route using as little fuel as possible.

The bar is set very high as last year’s event was won by Nick Chapman and Rosemary Homer from Leicestershire County Council who achieved an amazing average of 88.69 mpg over the total route of 339.3 miles.

Driving a Ford Fiesta ECOnetic 1.6 diesel-engined Titanium model, they out-performed the field of 23 other vehicles with a dazzling array of lean-driving skills. The pair have already confirmed that they will be attempting to defend their crown again this year.

There are eight main classes of passenger cars in this year’s MPG Marathon, restricted to a maximum carbon ceiling of 190g/km, as follows:

There are also five classes of light commercial vehicles, which will not have a carbon ceiling, as follows: