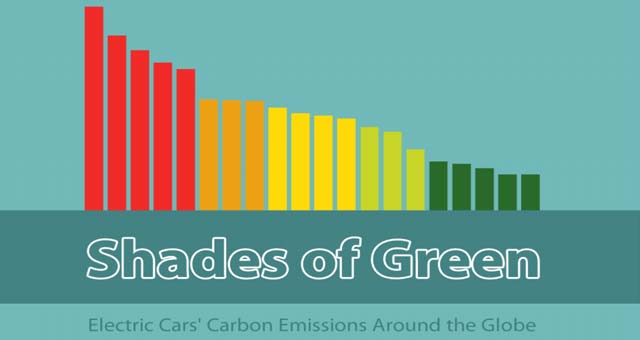 The carbon emissions of grid powered electric cars in countries with coal based generation are no different to average petrol vehicles, while in countries with low carbon electricity they are less than half those of modern hybrids.

The scale of this variation implies that the climate benefits of going electric are not evenly shared around the globe.

The new report [pdf], Shades of Green: Electric Cars’ Carbon Emissions Around the Globe assesses the climate impact of grid powered electric vehicles in twenty of the world’s major countries. The analysis includes the full scope of electricity, fuel and vehicle manufacturing emissions.

Paraguay, which produces five times more hydroelectricity than it uses, edges out Iceland as the greenest place on earth to drive an electric car. Electric driving in Paraguay results in emissions equivalent to a 220 MPG (US) petrol vehicle, or just 1 L/100 km.

In the US the shale gas boom is rapidly lowering electric driving emissions by displacing coal generation. Based on data from 2009, electric vehicle emissions are equivalent to gasoline cars with a fuel economy of 40 MPG (9 L/100 km), similar to a modern petrol hybrid. But given that the carbon intensity of electricity fell 15% in the decade to 2009, and the dash for gas has continued since, electric vehicle emissions are likely to fall below gasoline hybrids nationally in the near term, as they already have in many states.

In the UK, Germany, Japan and Italy the broad fuel mix of natural gas, coal, nuclear and hydro means an electric vehicle’s carbon footprint is similar to the best comparable petrol hybrids, or most efficient diesels. In the UK this equals a petrol fuel economy of 44 MPG (5.4 L/100 km), while in Germany it rises to 47 MPG (5.0 L/100 km).

In Canada and France, where hydroelectricity and nuclear energy dominate, the petrol emission equivalences are 87 MPG (2.7 L/100 km) and 123 MPG (1.9 L/100 km) respectively. In these countries electric cars have the potential to more than halve total vehicle emissions. In each case manufacturing accounts for around two thirds of electric car emissions, highlighting its importance in low carbon vehicles.