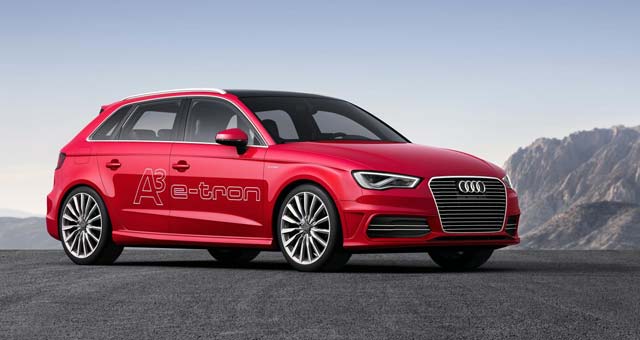 The all-new Audi A3 e-tron will have s starting price from £34,950, excluding government incentives, when it goes on sale in the UK from January 2015.

The A3 e-tron compact hatchback combines a conventional 1.4-litre TFSI petrol engine with an electric motor. The modified 1.4-litre TFSI unit, in this application featuring a peak power output of 150PS, is linked by a clutch to a 75kw electric motor, which is integrated into a specially developed six-speed S tronic transmission sending power to the front wheels. Combined, the two power units generate 204PS of system power and 350Nm of system torque, good for a 0-62mph sprint of 7.6 seconds and a top speed of 137mph.

Equally importantly, according to the ECE standard for plug-in hybrid cars, the A3 Sportback-based e-tron is capable of covering up to 176.6mpg with CO2 emissions of just 37g/km. With the combination of electric motor and combustion engine, an overall operating range of up to 584 miles is possible.

The Audi A3 e-tron can run exclusively on electric power for up to 31 miles at speeds of up to 81mph, or can be powered by petrol combustion alone. Alternatively, the hybrid mode brings both units into play, and the driver can choose to run these simultaneously – a function known as ‘boosting’ – by initiating kickdown by the S tronic transmission. In this mode the full 350Nm torque output is deployed for the strongest possible acceleration, but when the driver stops accelerating both motors temporarily deactivate, eliminating motor braking torque and allowing the car to glide to conserve fuel and recuperate energy.

Up to medium loads the motor can also function as an alternator, making a significant contribution to retardation and recovering energy which is fed into the traction battery. In this mode the wheel brakes only become active if the driver applies moderate force to the pedal.

Three hybrid modes or full EV
The driver has several ways of actively managing the vehicle’s response. Four key settings are available – the EV mode gives priority to electric drive, the hybrid auto mode is useful for long journeys as it engages the electric motor wherever possible, the hybrid hold mode preserves the electrical energy stored in the battery for later use and the hybrid charge mode uses the combustion engine as a generator to charge the battery.

The chosen mode is displayed by a powermeter in the instrument cluster, which also shows the system’s overall output and the battery charge. The monitor for the MMI navigation plus shows the energy flows in the hybrid system. In addition, the driver information system displays the operating ranges and consumption figures for electricity and petrol.

Thanks to the Audi ultra lightweight construction philosophy, the unladen five-door model complete with all electrical components weighs just 1,540 kilograms, with space for five occupants. It is quite literally an ‘everyday’ Audi, meaning that it demonstrates outstanding attention to design, engineering, ergonomics and quality, but most importantly demands no compromises for daily use.

Despite the fact that the smaller 12-volt battery powering the more ‘conventional’ in-car systems and the 40-litre fuel tank are located above the rear axle load space isn’t significantly impaired – in the standard configuration it measures 280 litres and 1,120 litres with the rear seat backs folded down.

The A3 e-tron is supplied with two charging leads as standard. One is specifically designed for use at public charging points and the other for domestic use. This lead also features interchangeable connectors which enable charging via higher voltage industrial sockets.

The charging lead supplies the car with alternating current from the grid via the charging connection, which is located in the single frame grille behind the fold-out four rings. As well as a status LED, the unit includes two pushbuttons allowing the user to choose between timer-controlled charging and immediate charging.

The charge status of the A3 e-tron can be monitored from a smartphone using the e-tron app, or via the e-tron web portal. It is also possible to use these to remotely start or stop charging or to set the charging timer and pre-set the climate control to reach a certain temperature at a pre-determined point. This means that the driver can specify in detail at what time and on what days he or she wants to drive away with the battery fully charged.

Fully charged in around two hours
Using a domestic socket it takes four hours to fully charge the battery. When a wallbox is connected or a public charge point is used this reduces to two hours and fifteen minutes.

UK ordering will be possible from early August, and the first A3 e-tron plug-in hybrids will arrive with customers in early 2015.