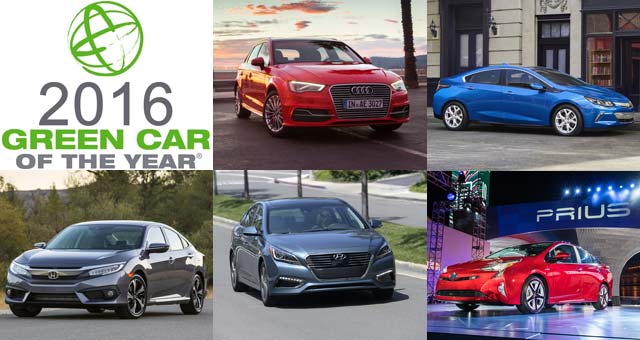 The LA Auto Show, in partnership with Green Car Journal, announced the finalists for the 2016 Green Car of the Year Award.

The 2016 models include the Audi A3 e-tron, Chevrolet Volt, Honda Civic, Hyundai Sonata, and Toyota Prius.

An increasing number of vehicle models are considered for the Green Car of the Year program each year, a reflection of the auto industry’s expanding efforts in offering new vehicles with higher efficiency and improved environmental impact. Green Car Journal has been honoring the most important “green” vehicles every year at the LA Auto Show, since its inaugural award announced at the show in 2005.

So here are the finalists:

Audi A3 e-tron
The A3 Sportback e-tron is Audi’s entry in the hot plug-in hybrid vehicle market. This five-door hatchback uses lithium-ion batteries and a 102 hp electric motor to deliver up to 19 miles of all-electric driving, after which its 150 hp, 1.4-liter gasoline TFSI engine provides power for extended driving in efficient hybrid mode.

Honda Civic
Now in its tenth generation, the all-new Honda Civic delivers exemplary fuel efficiency in an affordable, conventionally-powered model. The Civic thoughtfully blends hybrid-like fuel economy and appealing style, with an array of desired amenities and advanced electronics that meets the needs of a great many drivers.

Hyundai Sonata
Hyundai’s stylish 2016 Sonata offers it all with efficient gasoline, hybrid, and plug-in hybrid choices within the Sonata lineup. New this year, the hybrid delivers up to 43 highway mpg and features distinctive styling cues. The Sonata Plug-In Hybrid drives up to 24 miles on batteries with additional range on conventional hybrid power.

Toyota Prius
The venerable Toyota Prius emerges in 2016 a completely redesigned model, faithfully delivering the attributes expected of an industry-leading hybrid with important design, technology, and efficiency updates. It features a familiar yet bolder exterior and incorporates suspension and other improvements to deliver improved driving dynamics.