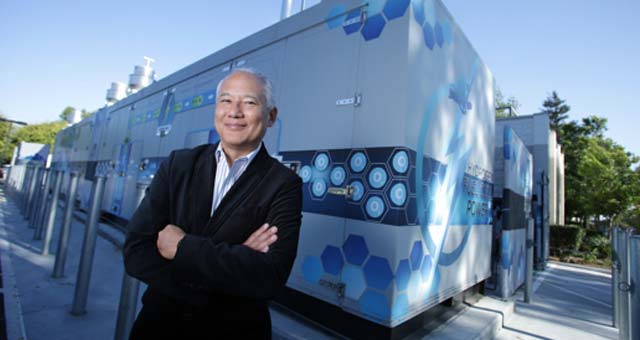 The first Toyota hydrogen fuel cell cars reach the market next year, but already the company is exploiting the technology to cut costs and carbon emissions at one of its largest office complexes.

A 1.11 megawatt stationary fuel cell has been installed at the Toyota Motor Sales headquarters near Los Angeles to generate electricity and reduce utility bills. It supplies about half the power needed by the six buildings on site during the summer when demand is at its peak.

The cell uses the same basic technology – a Proton Exchange Membrane – as the system installed in Toyota’s forthcoming production car. PEM fuel cells are well-suited to use in vehicles as they can be turned on and off quickly; this responsiveness and reliability also make them ideal for ensuring prompt power supply to the sales campus during high-demand periods.

Toyota’s installation is the largest of its kind in the world and was the first application of a fuel cell as a stationary power generator.

Mark Yamamuchi, who manages the site’s sustainable strategy programme, said: “Most other fuel cell technologies need to run continuously to generate baseload power. This project is unique in that we are leveraging the characteristics of the PEM technology to load-follow.”

Performance from the fuel cell is impressive:

– Average power supply equivalent to the electricity needs of 765 average American homes.
– Power capacity is twice that of the solar panel array on the same site.
– Expected reduction in CO2 emissions of up to 1,500 tonnes during peak summer operating hours.

The fuel cell uses hydrogen produced off-site, but supplied through the same pipeline that feeds the hydrogen filling station next to the TMS site. The fuel is produced by Air Products using a natural gas reformation technique; to minimise the impact of emissions from this process, Toyota offsets the carbon produced by purchasing renewable bio-gas generated from landfill waste.