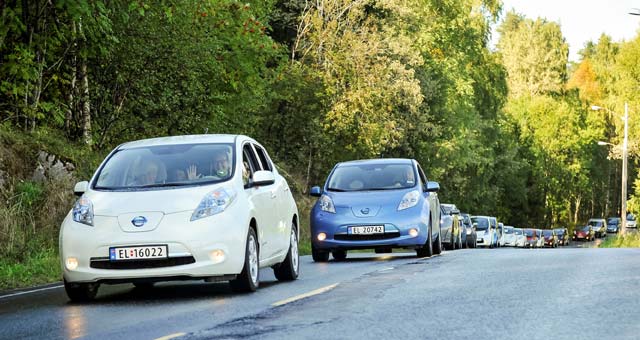 The all-electric Nissan LEAF was Europe’s best-selling electric vehicle in 2013 with 25% more sales than the next best-selling EV model.

Now commanding 33 percent of the EV passenger car market in Europe, the Nissan LEAF sold more than 5,600 more units in 2013 versus 2012, cementing its position as the world’s best-selling 100 percent electric vehicle.

The success of the Nissan LEAF in Europe has been propelled by consistently strong sales in Norway where the Nissan LEAF the third-most sold passenger car last year, became the country’s best-selling car at the end of January 2014 with 650 units.

Norway’s advanced EV infrastructure and government incentives continue to spur strong sales of electric vehicles in the county. Sales of the Nissan LEAF in Norway were up 145 percent in January compared to January 2013. The rest of Europe isn’t far behind. In 2013, the Nissan LEAF was the EV market leader in many other countries including Spain, Italy, Denmark, Sweden, Finland, Belgium, and the United Kingdom.

Huge strides are being made in the UK with sales of the British-built Nissan LEAF increasing by more than 1000 percent in January versus the prior year. The UK recently saw the installation of the 195th CHAdeMO rapid charger at the Clackett Lane Services on the M25. These chargers can “refuel” a Nissan LEAF from 0-80 percent battery in just 30 minutes at zero cost to the driver. The UK charger was the 1000th CHAdeMO rapid charger in Europe, almost double the number installed by January 2013.

Similar results were reported in France for January with a 240 percent increase in year-on-year sales where, for the first time, the Nissan LEAF is the EV market leader.

“January has been a fantastic start to 2014, a year when we will launch our second 100 percent electric model in Europe – the Nissan e-NV200 light commercial vehicle. Our most recent survey following the launch of the improved European-built Nissan LEAF shows that 97 percent of owners would recommend a Nissan LEAF to a friend, and we believe this, combined with a rapidly expanding charging infrastructure will bring further growth in 2014. We are moving from the early adopters to the early majority” said Jean-Pierre Diernaz, Director of Electric Vehicles, Nissan Europe.

Sales of the Nissan LEAF in Europe solidify Nissan’s role as the world’s leading producer of electric vehicles. The family friendly vehicle, which has now sold over 100,000 units globally, has been widely endorsed by its satisfied owners with 92% of Nissan LEAF owners being new to the Nissan brand.