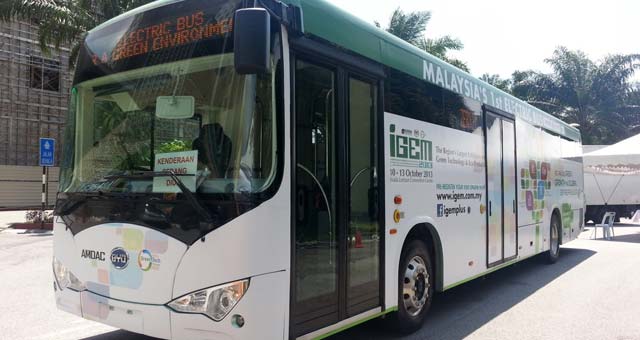 As Malaysia first, as well as Southeast Asia’s largest electric bus public bidding project, BYD beat out competitors from around the world for this project.

Since last August, BYD’s 40 foot electric bus has been in trial operation in Kuala Lumpur. As a part of the trial, the bus was arranged to run on a 5.3 km – 7 station, Bus Rapid Transit (BRT) line operated by Rapid KL and the trial operation results are satisfactory and high complimented by Prasarana. According to the report, the range of the pure electric bus could be more than 400 kilometers (248 miles) per charge in Kuala Lumpur.

BYD’s pure-electric bus employs many advanced technologies developed in-house by BYD’s expansive staff of more than 15,000 engineers. The advanced environmentally-friendly, Iron-Phosphate (or “Fe”) batteries, in-wheel hub motors and regenerative braking. The BYD Iron-Phosphate battery is fire-safe and non-toxic: there are no caustic materials contained in the battery, no toxic electrolytes or heavy metals and can be completely recycled. The BYD electric bus delivers a host of operational and environmental benefits for public transport riders, operators and people in the community – it is very quiet and ensures a comfortable ride without vibrations, jerks or noise associated with the conventional buses and combustion engines.

The bus can also drive for more than 250 km (155 miles) even in heavy city traffic on a single charge. The bus has completed more than 20 million kilometers of “in revenue service” and has been evaluated in many major cities all over the world.