Many Households Could Switch To Electric Cars Painlessly 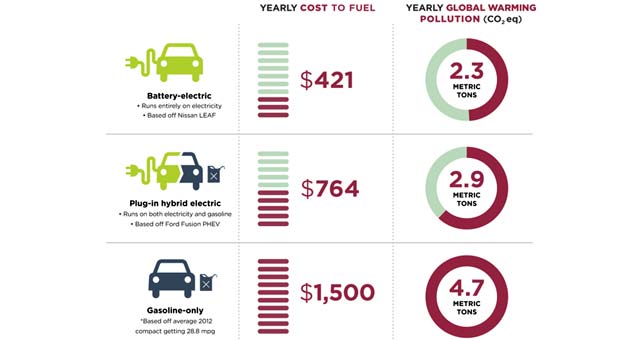 Four out of 10 households could use an electric car with little or no change to their driving habits and car needs, according to a national survey released by the Union of Concerned Scientists and Consumers Union.

While less than 1 percent of the country are driving electric cars today, the survey found 42 percent of respondents with cars – equivalent to 45 million households when applied nationally — meet the basic criteria for using plug-in hybrid electric cars like the Chevy Volt. Over half of those households are also able to use a battery-electric car like the Nissan LEAF.

While plug-in hybrid EVs have similar driving range to gasoline-only cars, the current range of BEVs on the market today can also meet many driver’s needs. The survey found that almost 70 percent of drivers drive less than 60 miles on a weekday, which is within the range of almost every BEV on the market today.

If everyone that could switch to driving on electricity did so today, the nation would:

– Save 15 billion gallons of gasoline each year, more than all the gasoline consumed last year by the entire state of California

– Avoid 89 million metric tons of greenhouse gas emissions each year, equivalent to removing 14 million of today’s gasoline cars from the road for a year; and

– Save $33 billion on fuel each year – based on gas prices of $3.60 per gallon and electricity costs of 12 cents per kilowatt hour.

Survey respondents met the basic criteria for using a typical plug-in hybrid EV available today if they have access to parking and an electrical outlet at home or work, need to carry less than 5 occupants, and do not need hauling or towing capability. A BEV was considered suitable when these criteria were met and maximum weekday driving distance did not exceed 60 miles and, in the case where weekend driving frequently exceeded current BEV range, other household cars were available.

The results of the survey not only indicate that millions of households could utilize an EV today, but also show how that figure could grow in the future. The survey found that 33 percent of respondents did not have access to parking with an electrical outlet, but met the other basic criteria for owning a plug-in hybrid electric car. In addition, more than a third, 37 percent, agreed that having access to charging at the workplace would increase the likelihood of considering an EV in their next car purchase.

While incentives which lower the cost of purchasing an electric car will continue to be a key strategy in supporting a growing market for electric cars, these findings suggest that efforts to increase access to car charging options at home and workplace can also help make EVs a more likely choice for car buyers.

The survey found 65 percent of Americans think electric cars are an essential part of our nation’s transportation future for reducing oil use and global warming pollution, with 60 percent saying they would consider owning one themselves. State policymakers are taking notice of consumer interest and the potential for increased use of EVs, with eight governors recently announcing a joint plan to put 3.3 million zero-emission cars on America’s roads by 2025.

The telephone survey was conducted among 1,004 randomly selected adults over 18 years of age and carried out over September 26 to September 30. Of all the respondents, 914 had at least one car and were surveyed on driving and parking behaviors. All respondents were asked about attitudes toward electric cars. The margin of error is +/- 3.1 percentage points at a 95 percent confidence level for questions asked of all respondents and +/- 3.2 percentage points for questions applied to car owners.