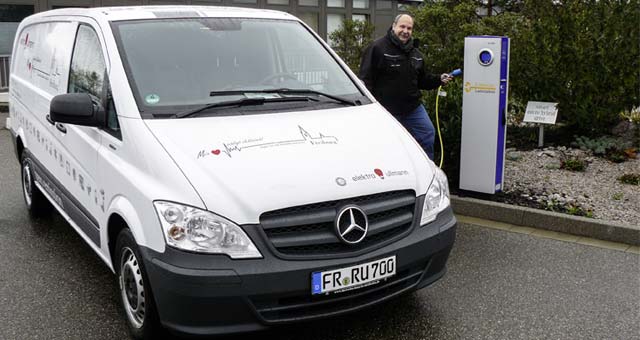 Freiburg-based master electrician Reiner Ullmann is a successful proponent of electric mobility: two Mercedes-Benz Vito E-CELL panel vans were introduced into his fleet of some 15 vehicles just under six months ago.

“My experience has been entirely positive,” the business owner notes. Taking stock after three months, he enthused: “Electric mobility fascinates me.” He has already ordered his next electric vehicle – a smart fortwo electric drive.

The two Vito E-CELL have been in service since the end of August, each covering some 2500 km to date. “We can cover almost all types of operations,” Ullmann observes. The two vans clock up around 20 to 50 km each day on their way to three or four construction sites. In the load compartment there is a shelf unit for tools and materials.

Depending on the vehicles’ deployment and the battery charge levels, the two vans are charged either overnight or during daytime operations. The wallbox to power the Vito E-CELL is installed right next to the entrance to the company premises. Ullmann is currently in talks with his electricity supplier on terms for the supply of “green” electricity.

The idea of introducing the electric vans into the firm’s fleet arose during a routine discussion between Ullmann and his employees. Two days later, the Freiburg dealership provided him with a Vito E-CELL to try out. Ullmann was quickly won over: “It’s a great feeling behind the wheel. Everyone who has driven an electric vehicle talks about it in positive terms.”

Reiner Ullmann is also leading the way with the Vito E-CELL. The boss drives one of the vans himself, while the second van has been allocated to a specific member of his workforce. The firm has many customers in the centre of Freiburg – a self-declared “green city” which sets great store by environmental protection. The city’s municipal authorities recently introduced a Mercedes-Benz B-Class F-CELL into their fleet, for example. The city’s residents are currently able to take part in an online campaign to combat noise. The two Vito E-CELL barely make a sound, however. “I enjoy cruising quietly through the pedestrian zone,” says Ullmann in praise of the Vito E-CELL. And he is equally delighted at the dynamic performance: “It’s a sheer delight to drive.”

In celebration of which, Ullmann is apt to indulge in an occasional racing start in his nimble Vito E-CELL when the traffic lights turn green. Generally, he keeps an eye on the power display on the dashboard, however. This informs him about the power being drawn from the battery or the recuperation process – that is, when braking energy is being transformed into electricity. “You use energy with a greater awareness,” Ullmann notes.

The electrician has an affinity for electric mobility by virtue of his occupation. “I am keen to acquaint myself with the technology, especially the charging process,” he says. Electric power is all part of day-to-day business for him and his workforce. The 47 year-old takes part in a round table in Freiburg which brings together politicians and members of the business community to discuss the topic of electric mobility.

Freiburg region: more than 60 Daimler electric vehicles in service, from smart fortwo electric drive to Atego Hybrid
Ullmann is provided with customer services from the Freiburg dealership, which is only a stone’s throw away from his business premises. The certified specialist workshop for high-voltage technology already services 50 smart fortwo electric drives, two Atego Hybrids, nine A-Class E-CELL, two B-Class F-CELL and now Reiner Ullmann’s Vito E-CELL. No repair or maintenance work has been required to date – the vans run without a problem.

The technology on board the Mercedes-Benz Vito E-CELL
The multiple award-winning Mercedes-Benz Vito E-CELL is the first series production all-electric van. Its electric motor generates an output of 60 kW and 280 Nm of torque. Both are available as soon as the motor is started up. The lithium-ion battery with a total capacity of 36 kWh is installed safely under the load compartment floor. The load compartment capacity remains fully available, allowing a load of up to 850 kilograms. The maximum speed is limited to 89 km/h. This benefits the vehicle’s range, which stands at 130 km according to the NEDC (New European Driving Cycle). The Vito E-CELL is available in more than 15 European countries.

The sustained success of electric technology in commercial vehicles will ultimately hinge on its economic efficiency.As it does not require any fuel whatsoever, electric technology is a key contributory factor to overall economy throughout the vehicle’s service life.[wzslider height=”400″ lightbox=”true”]

Dec 13, 2013Blagojce Krivevski
Many Households Could Switch To Electric Cars PainlesslyChargePoint Offering up to $1,250 Trade-In Credit for CT4000 Customers