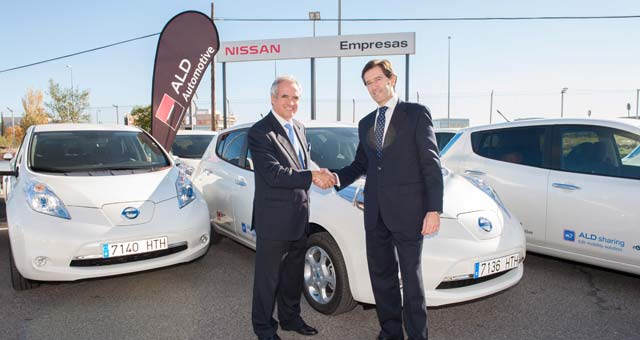 Spain is the latest European country to promote car sharing as the perfect way to introduce the benefits of zero emission electric vehicles to drivers.

Backed by Nissan, new schemes in Madrid and Barcelona will see no fewer than 23 examples of the Nissan LEAF – the most popular pure electric vehicle in the world – being made available for drivers to sample by the hour, or longer, as part of their daily routine.

The Spanish schemes, run by a division of ALD Automotive, are aimed primarily at small business without the resources or need for a full company car fleet. Instead, employees can take advantage of strategically located ‘shared’ Nissan LEAFs to go to meetings or make deliveries.

Cars can be hired for as long as needed with transactions completed quickly and simply using just a mobile phone – which effectively becomes the vehicle’s key – negating the need to visit a rental company’s office to pick up a vehicle.

In November 2012, an EV sharing scheme was established in Essen, Germany, as part of the Ruhr Auto Project. With a fleet of 40 EVs, including five Nissan LEAFs, for short-term rental, the Essen scheme is the first of a planned network of EV car sharing clubs across the country.

In July 2013, Estonian Governmental foundation Kredex established a project in partnership with ELMO Rental to introduce a fleet of 24 EVs, 16 of which are Nissan LEAFs, to two large towns – Tallin and Tartu.

The scheme has proven very popular. The price (€6 for the first hour, €3 for every subsequent hour and no more than €30 for 24hrs) includes unlimited charging throughout the extensive Estonian QC network.