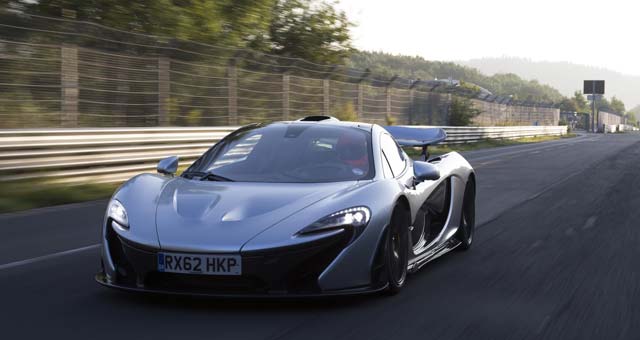 The McLaren name was born on the racetrack and, 50 years on, is one of the the most successful name in global motorsport. That desire and determination to push for every extra tenth of a second, and obsessive focus on perfection, has seen the final development objective for the now sold out McLaren P1 achieved: a sub-seven minute lap time of the Nurburgring circuit.

From the outset, the McLaren P1 has been developed with one clear goal: to be the best driver’s car on both road and track. To achieve this, the development program has focussed on ensuring the McLaren P1 pushes the boundaries in terms of sheer performance, with testing carried out in some of the harshest conditions around the world. But one challenge remained, and that was arguably the toughest of them all.

The Nurburgring-Nordschleife is the toughest test track to measure the all-round performance of any car.  And among the McLaren P1’s performance targets, which included accelerating to 300km/h (186mph) in less than 17 seconds onto a limited top speed of 350km/h (217mph), was to achieve a sub-seven minute time around the German circuit.

Sub-seven minutes – that calculates as an average speed of at least 178 km/h (111 mph) around the 20.8 kilometer (13 miles) circuit. And not just any circuit. One that includes some of the longest straights, tightest bends, steepest inclines, and more changes in road surface than any other circuit.

McLaren hasn’t revealed the exact time of the run, leaving it unclear whether the P1 is capable of besting the Porsche 918’s 6:57 effort.

The Supernova Silver example of the McLaren P1, codenamed XP2R, was driven the 390 miles from Woking, England across to the Nurburgring ahead of this final development test phase, underlining the car’s unique road-to-race ability. On arrival at the track, ‘Race’ mode extended the active rear wing by 300mm, dropped the ride height by 50mm and saw the RaceActive Chassis Control suspension system stiffen by 300 percent – a fully-focussed track car at the push of a button.

The McLaren P1 generates up to 600kgs of downforce through the use of advanced active aerodynamics which, in conjunction with the bespoke tyres, provides unprecedented levels of grip and superior balance and handling. This allows the McLaren P1 to carry greater levels of speed through the corners, and achieve higher apex speeds, and the optimized traction enables the driver to get on the power earlier.

The combination of optimized aerodynamics, cutting-edge bespoke systems developed with technical partners and never-before-used technologies, have ensured the McLaren P1™ has achieved, and in many cases exceeded, all objectives during development. It is the culmination of five decades of race-winning knowledge and expertise which has been transferred to the track with the motivating factors that have driven the McLaren name to be one of the most successful in motorsport – belief and a desire to achieve.

A sub-seven minute lap time of the Nurburgring-Nordschleife was the final objective in the development program for the most technologically advanced car ever produced in the UK. This latest achievement for the team at McLaren was made possible through close collaboration with world-leading Partners, providing specialist expertise and technical support throughout the duration of the project.

A unique and highly efficient braking system from Akebono, providing stopping ability akin to a fully-focused racing car; a specially-formulated lightweight paint system by AkzoNobel offering optimized performance and aerodynamics; advanced performance and cooling characteristics of Mobil 1 lubricants in the engine and gearbox; bespoke high performance tyres created by Pirelli designed and developed specifically to manage the unprecedented downforce and cornering forces generated; and the use of highly accurate TAG Heuer timing technology and equipment for the continual verification of performance characteristics during the development program.[wzslider height=”400″ lightbox=”true”]