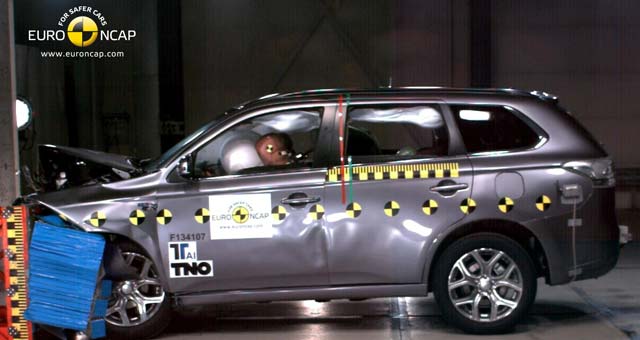 Outlander PHEV results showed the excellent level of protection of the under-floor battery pack and components of the high voltage electric system, which were unaffected by this crash test.

Child occupant
Based on dummy readings in the dynamic tests, the Outlander PHEV scored maximum points for its protection of the 1½ year infant. In the frontal impact, forward movement of the head of the 3 year dummy, sat in a forward-facing restraint, was not excessive and deceleration of the chest indicated fair protection of this body area. In the side impact, both dummies were properly contained by the protective shells of their restraints, minimizing the likelihood of head contact with parts of the vehicle interior. The front passenger airbag can be disabled to allow a rearward-facing child restraint to be used in that seating position. Clear information is provided to the driver about the status of the airbag and the system was rewarded. The dangers of using a rearward-facing restraint in that seat without first disabling the airbag are clearly indicated in the car. Mitsubishi will update the user manual for the Outlander PHEV to make clear which categories of child restraints are suitable for which seating positions, and the score reflects this updated information. Earlier cars would have received the same star rating as the changes in the manual have only a small influence on the score.

Pedestrian
The bumper scored maximum points for its protection of pedestrians’ legs. However, the front edge of the bonnet was poor in all areas tested and scored no points. The bonnet surface provided predominantly good or adequate protection to the head of a struck pedestrian with some poor results recorded only on the stiff windscreen pillars.

Safety assist
The Outlander PHEV has electronic stability control as standard, and met Euro NCAP’s test requirements. The front and rear seats are protected by a standard-fit seatbelt reminder system and the car has a driver-set speed limitation device which met test requirements for systems of that type.

Outlander PHEV has just starting its commercial career in Europe with 12,000 orders received as of Nov. 18th, 2013. In the Netherlands, its launch market, the current order rate is of 100 units per week and growing.