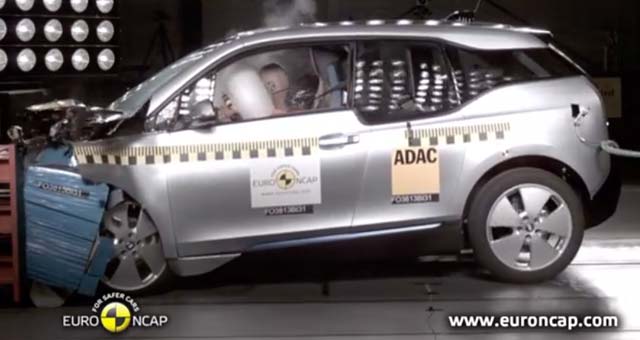 The BMW i3 EV scored only four out of a five possible stars in the latest Euro NCAP crash test.

Based around a carbon fiber body – designed to increase strength and rigidity – few expected the BMW i3 to score less than the full five-star rating.

Adult occupant
The passenger compartment remained stable in the frontal impact. Dummy readings indicated good protection of the knees and femurs of both the driver and passenger. BMW showed that a similar level of protection would be available to occupants of different sizes and to those sat in different positions. In the side barrier test, the i3 scored maximum points, with good protection of all body regions. In the more severe side pole impact, dummy readings of rib compression indicated that protection of the chest was weak. The front seats and head restraints provided marginal protection against whiplash in the event of a rear-end collision.

Child occupant
Both the 1½ and 3 year dummies were sat in rearward-facing seats, according to BMW’s recommendation. Based on the dummy readings from the dynamic tests, the car scored maximum points for its protection of both infants. In the side impact, both dummies were properly contained within the protective shells of their restraints, minimizing the likelihood of head contact with parts of the vehicle interior. A disabling system is available as an option for the front passenger airbag, allowing a rearward-facing child restraint to be used in that seating position. However, the information provided to the driver regarding the status of the airbag is not sufficiently clear. The risks of using a rearward-facing seat in the front passenger seat without first disabling the airbag are clearly indicated in the car. All of the child restraint types for which the car is designed could be properly installed and accommodated.

Pedestrian
The bumper scored maximum points for its protection of pedestrians’ legs, with good results in all areas tested. However, the front edge of the bonnet was poor and scored no points. The bonnet provided protection to the head that was predominantly adequate or marginal, with poor results recorded at the base of the windscreen and along the stiff windscreen pillars.

Safety assist
The i3 has electronic stability control as standard equipment, and met Euro NCAP’s test requirements. A seatbelt reminder is provided for the front seats but not for the rear. A system is available as an option which uses sign recognition to inform the driver of the speed limit. The driver can then set the speed limiter of the car to the appropriate speed. However, the system is not expected to reach Euro NCAP’s minimum fitment rate to qualify for assessment.