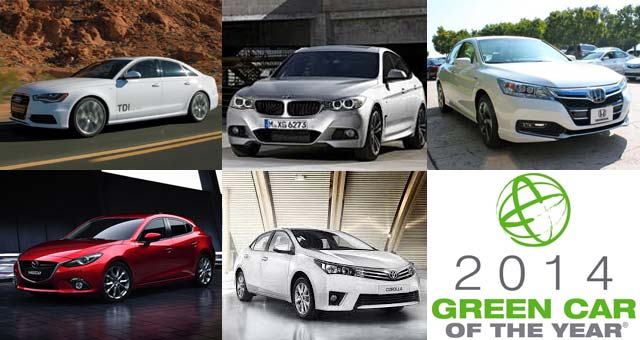 An increasing number of vehicle models are considered for the Green Car of the Year program each year, a reflection of the auto industry’s expanding efforts in offering new vehicles with higher efficiency and improved environmental impact. Green Car Journal has been honoring the most important “green” vehicles every year at the LA Auto Show, since its inaugural award announced at the show in 2005.

Finalists are selected for their achievements in raising the bar in environmental performance. Availability to the mass market is a factor to ensure honored models have the potential to make a real difference in environmental impact, and finalists must be available for sale by January 1st of the award year.

Green Car of the Year jurors include auto enthusiast and Tonight Show host Jay Leno, plus leaders of the nation’s major environmental organizations including Jean-Michel Cousteau, president of Ocean Futures Society; Frances Beinecke, president of the Natural Resources Defense Council; Michael Brune, executive director of the Sierra Club; and Matt Petersen, board member of Global Green USA. Green Car Journal editors round out the 2014 Green Car of the Year jury.

Last year, the 2013 Fusion emerged on top of an exceptional field of finalists including the 2013 Dodge Dart Aero, Ford C-MAX, Mazda CX-5 SKYACTIV and the Toyota Prius c.

2014 Honda Accord
Honda’s popular Accord sedan aims to lead in the efficiency space with an array of efficient powerplant choices including four-cylinder, V-6, hybrid, and plug-in hybrid versions. Even the V-6, the largest engine option, nets 34 highway mpg with the four-cylinder rated at up to 36 highway mpg. The bar raises considerably with the 2014 Accord Hybrid at 50 city and 47 highway mpg, and the 2014 Accord Plug-In with its 47 city and 46 highway mpg on hybrid power. The Plug-In also offers an EPA rating of 115 MPGe, the highest of any mid-size hybrid sedan in the country.

2014 Mazda3
The all-new third generation Mazda3, this automaker’s best-selling model worldwide, is lighter, more efficient, and packed with advanced electronics. The 2014 Mazda3 features an appealing new design and has been built from the ground-up with Mazda’s award-winning SKYACTIV technology. The 2.0-liter powered Mazda3 four-door sedan offers best-in-class 41 mpg highway fuel economy, with the five-door hatch coming in at up to 40 mpg. A more powerful 2.5-liter engine with an i-ELOOP capacitor-based regenerative engine braking system gets 38 mpg.

2014 Toyota Corolla
The Toyota Corolla has long been a best-seller due to its blend of efficiency and affordability. With the all-new 2014 Toyota Corolla, Toyota adds visual excitement, improved driving dynamics, and even greater efficiency to its popular compact sedan, achieving up to 42 highway mpg delivered by the model’s Eco version. This level of efficiency is achieved with a 1.8-liter, 140 horsepower engine featuring the first use of Toyota’s Valvematic technology in this country. A driver selectable ECO function moderates acceleration and optimizes on-board systems to enhance mpg.