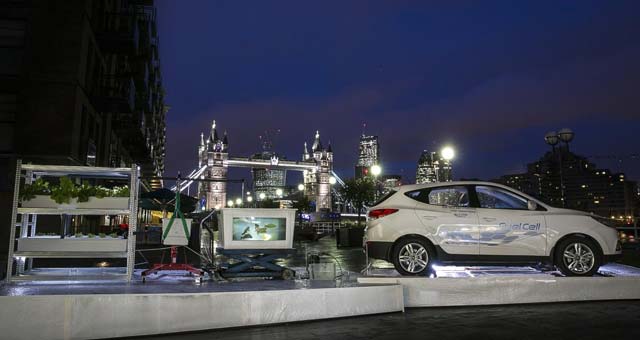 Aquaponics is a sustainable farming solution; a combination of hydroponics (growing plants in water) and aquaculture (raising fish in tanks). The Fuel Cell Farm operates by taking the water emitted by the hydrogen-powered Hyundai ix35 Fuel Cell and filtering this water into the fish tank. The aquaponics technology then harnesses minerals from the fish waste to grow the plants on the farm.

Essentially the Hyundai ix35 Fuel Cell, which is the world’s first production fuel cell vehicle, is the heartbeat to the lifecycle of the installation. It powers and facilitates the functionality of the aquaponics farm, using clean emissions (only water) to fuel sustainable agriculture.

To design and create the installation, Hyundai Motor UK collaborated with highly acclaimed sustainability creatives, Something & Son. This design practice is rooted in a long history of British inquisitiveness and experimentation, applied to the creation of a more sustainable world.

Hyundai has commissioned acclaimed eco-chef, Tom Hunt, to utilise the food that has been grown on the Fuel Cell Farm as well as other sustainably grown and sourced produce to create a one-off banquet.  Tom Hunt is the founder of the Forgotten Feast, working on projects throughout the UK to revive our cooking heritage and help reduce food waste. He is known for running his kitchens entirely waste free and for only using seasonal and organic products sourced within a 50 mile radius to create real communities through food.

As the first car company in the world to assembly line-produce fuel cell vehicles, Hyundai has accelerated London’s plans to become one of the major hydrogen capitals of the world and will soon be delivering five emission-free ix35 Fuel Cells to the Greater London Authority. These cars will operate in London and be an integral part of the London Hydrogen Network Expansion (LHNE) project.

Two hydrogen fuel stations are already open in the Capital – one of which has public access – with a third to come as part of the LHNE project.[wzslider height=”400″ lightbox=”true”]