Fujitsu and RESC Collaborate on Infrastructure to Support Electric Scooters 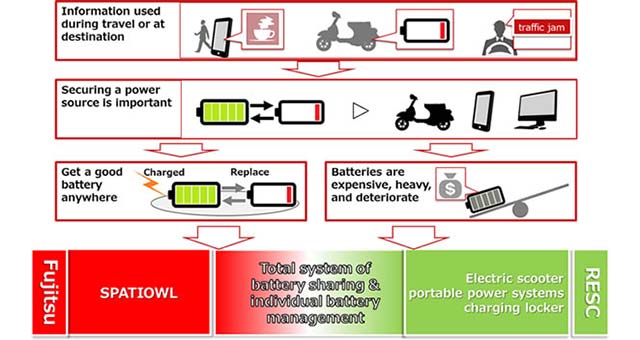 Fujitsu Limited and venture start-up RESC, Ltd. announced an agreement to collaborate in developing an infrastructure system that integrates the fields of information and communications technology (ICT) and energy to help bring about a new electric vehicle society.

Under this agreement, the portable cassette-type secondary batteries used in RESC’s electric scooters and the charging lockers that recharge them will be managed and analyzed by Fujitsu’s cloud service that employs location data, the Fujitsu Intelligent Society Solution SPATIOWL.

This will make it possible to monitor travel-related information, such as road traffic and vehicle statistics. Information on when the scooter batteries need to be charged, when they need to be replaced, and information on the location of replacement batteries and charging lockers, which are spread out in a variety of locations will also be available.

As a first step, by 2015, they plan to roll out electric scooters with these batteries to delivery companies, along with the infrastructure system described above, building the foundation for a society in which electric vehicles are ubiquitous. By 2020, the system will be available to the general public.

Global warming and the depletion of petroleum resources are spurring on a desire to increase the number of electric vehicles within our society to enable people to get around with zero CO2 emissions. There are, however, issues that still need to be resolved before that can happen, including the ability to monitor battery capacity and deterioration, and the construction of a supporting infrastructure.

By integrating ICT and energy fields, Fujitsu and RESC will build a new system that can manage and analyze batteries. By managing each battery as a separate unit, the system can keep track of its remaining charge, deterioration, and location, bringing the following benefits:

– Electric vehicle users will be able to use batteries that are in good condition.
– Personnel in charge of batteries can track the utilization of each one to manage resources efficiently.
– Battery usage by individual users can be ascertained, thereby allowing for multiple users to share more than one battery. This makes it possible to utilize the service based on proper operating costs in line with actual usage.

For Fujitsu, this collaboration is an opportunity to build the kind of battery-management platform that will be a necessary part of a society that embraces electric vehicles. In addition, Fujitsu aims to use scooters as sensors to collect various data, including on road conditions and batteries, developing new businesses that put big data to use, and plans to gather a wide-range of additional partners to expand alliances into related areas.

As a new framework to realize these efforts, Fujitsu Limited established its Fujitsu Big Data Initiative, announced June 24, 2013, within which is structured a support program to assist venture companies. Fujitsu will work jointly with these partners, supporting commercialization and promotion of services.

To track battery deterioration and accurately forecast battery replacement, Fujitsu has developed a sophisticated deterioration-modeling engine in SPATIOWL, and plans to make further contributions to help move the energy sector forward, such as finding new applications for used batteries that still have remaining value.

Within the year, RESC plans to run verification tests of its electric vehicle system based on charging lockers and batteries that can be charged, replaced, and monitored anytime and anywhere, as part of a new concept in electric vehicles that uses renewable energy.[wzslider height=”400″ lightbox=”true”]