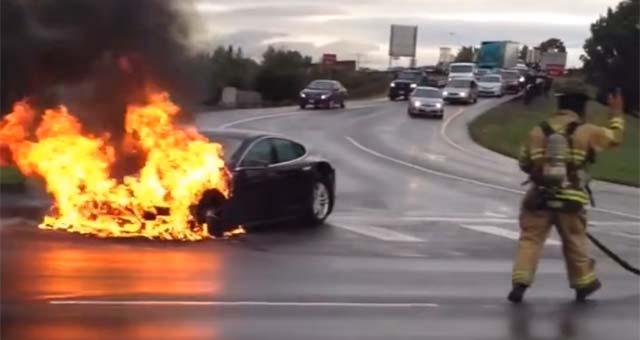 Musk says that the fire was caused by a piece of a semi-trailer that punctured the battery compartment of the car with a “peak force on the order of 25 tons.”

But Musk emphasizes that despite how bad the video may have looked, no fire ever entered the passenger compartment thanks to internal firewalls integrated within the battery pack.

“A curved section that fell off a semi-trailer was recovered from the roadway near where the accident occurred and, according to the road crew that was on the scene, appears to be the culprit. The geometry of the object caused a powerful lever action as it went under the car, punching upward and impaling the Model S with a peak force on the order of 25 tons. Only a force of this magnitude would be strong enough to punch a 3 inch diameter hole through the quarter inch armor plate protecting the base of the vehicle.”

“The Model S owner was nonetheless able to exit the highway as instructed by the onboard alert system, bring the car to a stop and depart the vehicle without injury. A fire caused by the impact began in the front battery module – the battery pack has a total of 16 modules – but was contained to the front section of the car by internal firewalls within the pack. Vents built into the battery pack directed the flames down towards the road and away from the vehicle.”

Elon Musk blogged that this was the first fire to hit one of the Model S sedans while gas-powered car fires are relatively common.

Musk’s blog post included an email from Robert Carlson, whose Model S had caught fire, in which the owner seems to downplay the entire incident, which he suggested looked a lot worse in the Internet version than it did in reality.

“The batteries went through a controlled burn which the Internet images really exaggerates,” Carlson wrote. “Anyway, I am still a big fan of your car and look forward to getting back into one. I am also an investor and have to say that the response I am observing is really supportive of the future for electric vehicles.”

The Tesla Model S itself has received rave reviews, including a top crash-test score from the National Highway Traffic Safety Administration and a tie for the highest auto rating ever recorded by Consumer Reports magazine.