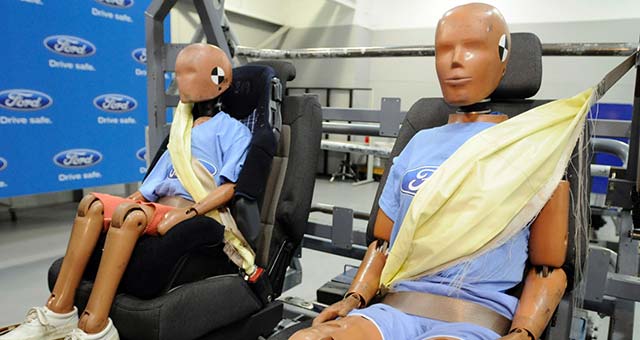 Ford has announced the 2014 Fusion Energi and Fusion Hybrid can be equipped with rear inflatable safety belts.

According to Ford, the new Ford Fusion is the only car in the popular midsize segment to offer rear inflatable safety belts, adding to the sedan’s suite of available safety and driver-assist technologies.

Rear inflatable safety belts combine the attributes of safety belts and airbags. The shoulder belt developed for the outboard rear seats contains an airbag. During a crash, sensors determine when the inflatable belt should deploy and signal the belt’s tubular airbag to rapidly inflate with compressed gas.

Ford introduced inflatable rear safety belts on the 2011 Ford Explorer; along with Fusion, the technology is now also available on Ford Flex and Ford Taurus, and Lincoln MKT and Lincoln MKZ. The class-exclusive technology will also be available overseas when the new Ford Mondeo arrives in that market in late 2014.

In everyday use, inflatable belts operate like conventional safety belts, and are compatible with child car seats and boosters. (Always refer to the child car seat or booster seat manufacturer’s instructions for specific information.) During a crash, the inflatable belt helps distribute crash forces across more of a passenger’s torso than a traditional belt – up to five times more. Spreading the pressure over a larger area helps reduce pressure on the passenger’s chest, and helps control head and neck motion.

Safety experts acknowledge that the back seat is the safest place for children, and Ford is committed to keeping all vehicle occupants safe.