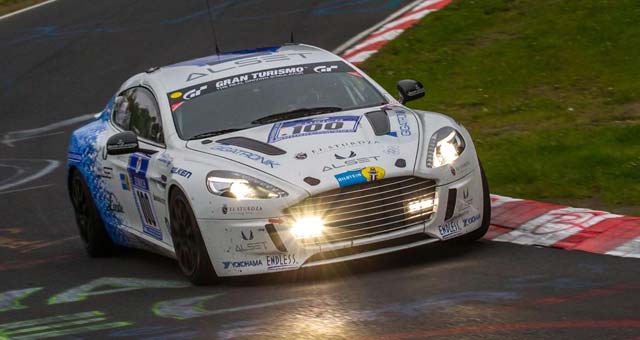 The car, which achieved a world-first when it qualified for the 2013 Nürburgring 24 Hours running on pure hydrogen, is based on an Aston Martin Rapide S but features a special bi-fuel hydrogen/petrol twin turbo 6.0-litre V12 engine developed by the brand in conjunction with Austrian hydrogen internal combustion engine specialists Alset GmbH.

David King, Head of Special Projects at Aston Martin comments: “We successfully raced the car at the Nürburgring 24 Hours in May, covering more than 20% of the race distance running only on hydrogen. Our CEO, Dr Ulrich Bez, a regular competitor at the race since 2006, actually completed more than 40 CO2 emissions-free kilometres at full racing speed on one fill of hydrogen alone, comfortably exceeding our target. To finish a gruelling 24-hour race like that was real testament to the engineering teams at Aston Martin and Alset who developed the car.

“Since then, the car has made a brief appearance in our centenary parade lap at Le Mans in June, but has never been seen in action in the UK until now. Running the car up the hill at Shelsley Walsh seems the most fitting way to show it off, recognising the company’s long association with the venue and fitting in nicely with the wonderful Aston Martin tribute being held at the event.[wzslider height=”400″ lightbox=”true”]