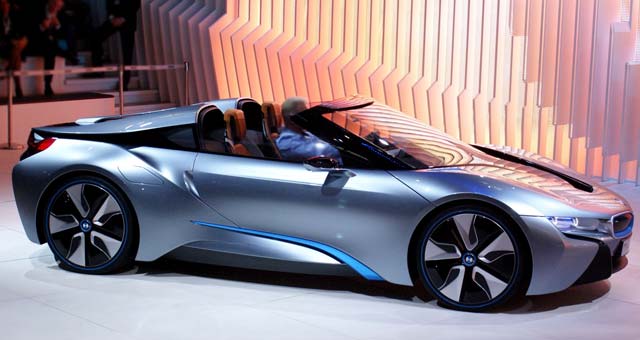 The BMW i8 Roadster won the North American Concept Car of the year Award in the Best Production Preview Vehicle category.

The Production Preview category recognizes those vehicles based on a model that has already been announced or planned for production.

The awards are given to the best Production Preview Vehicle, Concept Car, Concept Truck/SUV, Specialty Concept, and Most Significant Concept Vehicle of each auto show season. Ford Atlas pickup, shown in Detroit, believed to be a preview for the next-gen F-150, was voted best concept truck, while Hyundai’s HCD-14 Genesis, also introduced at the Detroit Auto Show, was awarded with the best concept car trophy.

To be eligible for the awards, a concept vehicle must make its North American debut during the current model year’s auto show season.

More than two dozen Professional Automotive Journalists from throughout North America serve as volunteer jurors for all categories of the awards. By extending the review to the whole package – design, style, materials, technology, market viability and market responsiveness – and concentrating the focus on the market that the jurors know best, the North American Concept Vehicle of the Year Awards provide truly valuable feedback to help shape the future of the automotive industry.

BMW’s i8 Spyder, which made its debut at the Los Angeles Auto Show, offers the combination of a plug-in hybrid with a powerful internal combustion engine offering extreme efficiency of up to 87 miles per gallon and 0-60mph times of 4.5 seconds.