How Electric Vehicles Give Back to the Grid? 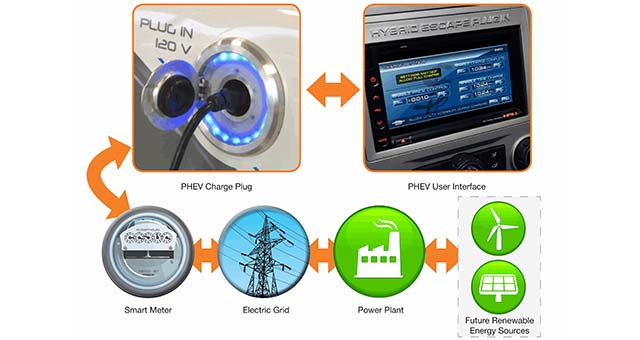 What do you get when you combine electric vehicles, household appliances, homes and cold storage refrigerator warehouses?

The answer: a more stable and predictable electric utility grid.

In 2009 the EDISON consortium was formed to develop an intelligent infrastructure that will make possible the large-scale adoption of electric vehicles powered by sustainable energy. The consortium partners include Dansk Energi, Dong Energy, Denmark Technical University, Eurisco, IBM, Ostkraft and Siemens.

The small Danish island of Bornholm was selected for the project due to its unique location and its ability to completely sever itself from the mainland grid. In fact, only one power cable goes to the island. Perhaps most importantly, the Danes living there are incredibly supportive of renewable energy technologies.

The concept behind EDISON is based on smart algorithms which synchronize the charging of electric vehicles on the island based on the availability of wind energy on the grid. Therefore, when the wind is gusting the vehicles plug in and charge. When it’s not, the vehicles remain plugged in – but instead of charging they give energy back to the grid, creating a more sustainable balance.

Dieter Gantenbeln, an IBM scientist on the EDISON project says, “There is no point in using electric vehicles if you are burning fossil fuels or nuclear energy to charge it, so we thought about adding some intelligent analytics that would use the vehicles as a buffer for the irregular production of electricity from future renewable sources.”

EDISON was a successful demonstration, but electric vehicles – while making great strides – are still a niche product. This got the scientists thinking. What else could be used as a buffer for the irregular production of wind and solar energy? The answer was two different projects designed to create a buffer for Smart grid – the first one looking at household appliances – the second focusing on industrial cooling warehouses.

The first was EcoGrid EU; launched in 2011, this European consortium expanded on the concepts of EDISON. Instead of only using electric vehicles, the scientists would use their smart algorithms to automate appliances such as heat pumps and electric water heaters. In addition, residents receive relevant information about their electricity production, consumption, and price points, adding a new level of awareness and participation that should lead to increased energy savings.

Dieter adds, “The EcoGrid EU project, combined with lessons learned from EDISON, demonstrates our steady movement towards a sophisticated smart grid that will be capable of managing the future requirements for energy.”

Getting cold with smart grids

Despite the scientific success of both projects IBM scientists in Zurich knew that they needed more scale to have a real impact on the grid. So they partnered with Swiss supermarket chain Migros, one of the largest consumers of electricity in Switzerland.

As with many supermarket chains, Migros owns cold storage warehouses to store vegetables, meat, fish, diary products and baked goods. The combined warehouses create a gigantic refrigerator, roughly the size of 30 soccer fields. To keep the food cold requires 500,000 kilowatt hours per month, equivalent to the consumption of approximately 1,500 homes.

“We asked ourselves, ‘How can we do this smarter?’,” said Roland Stadler, Migros’ Head of Energy Purchase. “We know when our trucks arrive and depart, and we know the schedule of our employees. Therefore if we could integrate this data with our energy needs based the availability of renewable electricity, we can maintain the temperature of the warehouses and simultaneously contribute to the future stability of the grid.”

Using its own logistics and warehouse sensor data on temperatures and consumption, real-time energy data from utility companies BKW and Swissgrid, and software and algorithms developed by IBM, the project known as Flexlast will optimize the balance between the production and consumption of energy. When the sun shines and the wind gusts, the air conditioning units in the warehouse will run full blast. When renewable energy isn’t available, they’ll run at a lower level or shut down completely.

“We have demonstrated that electric vehicles, appliances and homes can be used to buffer the irregular production of electricity from future renewable sources for greater stability of the grid,” said Dieter. “Now with FlexLast we can add cold storage warehouses to the mix.”