Nine Japanese companies – including automakers – have partnered together to establish an organization to provide membership-based quick-charging services for users of electric vehicles.

The organization, named the Charging Network Development Organization, LLC, aims to encourage increased and widespread use of electric vehicles by helping to expand the scope of charging infrastructure.

As of the end of October, approximately 800 quick chargers have been installed in Japan, a number still viewed as insufficient from a users’ standpoint.

Until now, quick chargers have generally been installed, at the owner’s expense, by businesses and private organizations for private use or as part of a government program. The lack of an effective method to recover costs has become a significant obstacle to widespread installation.

Under the new membership service, quick-charger owners can register their chargers with the organization in a central database. The organization will then make charger information, such as number and location, available to EV users registered as members, thus facilitating convenient and efficient charging.

Membership fees will pay a portion of the installation and maintenance costs incurred by quick-charger owners, helping to promote the development of quick-charger infrastructure. The organization plans to start such services in fiscal year 2012.

The concept for the service is the result of investigations conducted by a working group formed at the request from the CHAdeMO Association to all its members in July 2010.

In March 2011, the CHAdeMO Association announced that it would support the commercial development of the service to promote the spread of quick-charging infrastructure.

The organization will seek the cooperation of a broad range of local governments and businesses for the service while working to increase interest in quick-charger installation, thereby establishing a charging infrastructure sufficient to encourage the greater use of EVs and to increase user convenience. 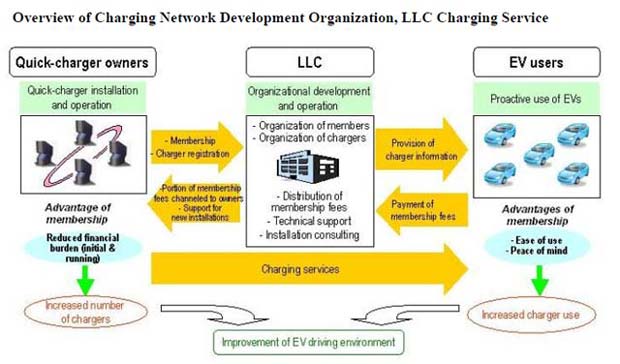