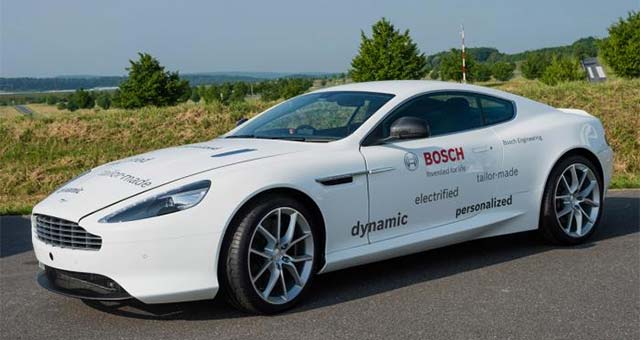 Aston Martin and Bosch Engineering have teamed up to create a DB9 plug-in hybrid prototype to showcase the driving dynamics potential of plug-in hybrids.

The DB9 plug-in hybrid prototype has a 6.0-liter V12 engine and three electric motors – pair of 85kW electric motors to power front wheels and a smaller 25kW electric motor next to the Aston’s V12 – keeping the engine belt turning so the power steering and other ancillaries can do their jobs even in all-electric mode.

The DB9 plug-in hybrid’s electric motors are driven by a 180kWh lithium-ion battery located just ahead of the rear axle.

The Aston Martin DB9 plug-in hybrid prototype was built as a showcase for what Bosch technology can do for existing performance cars.[wzslider height=”400″ lightbox=”true”]

Jun 16, 2013Blagojce Krivevski
Running Costs for EVs ‘On Par’ With Hybrids, Conventional VehiclesMcLaren P1 Almost Sold Out in the UAE