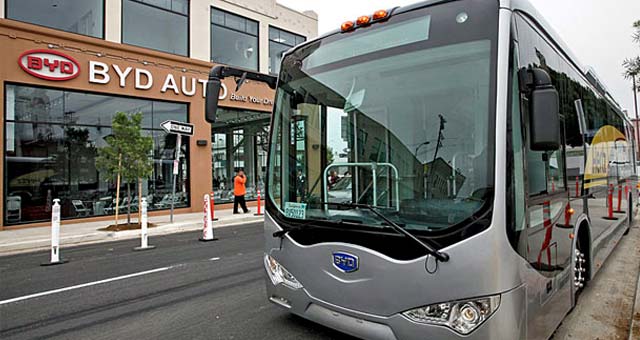 BYD will begin operating an electric bus and a Li-ion battery manufacturing facility in Lancaster, California, in the coming months.

These mark the first manufacturing facilities in the United States for BYD Motors Inc, a Los Angeles-based subsidiary of the China-based BYD Company Ltd.

In related news, BYD delivered 6 electric buses to the island home of city of Schiermonnikoog, and the Netherlands’ first National Park in the province of Friesland, Netherlands.

The vehicles were awarded last June 2012 in Europe’s first publicly tendered order for electric-powered full size buses and are planned to provide visitors and residents with an environmentally-friendly public transport system for the next 15 years.

The 12-meter long BYD electric bus is able to run 250 km (155 miles) on a single charge in urban conditions. This allows a traveling range that is sufficient for one whole shift in most cities. The core technology of BYD electric buses is BYD’s self-developed Iron-Phosphate battery technology boasting the highest safety, longest service life and most environmentally-friendly rechargeable chemistry. It also contains no heavy metals or toxic electrolytes.