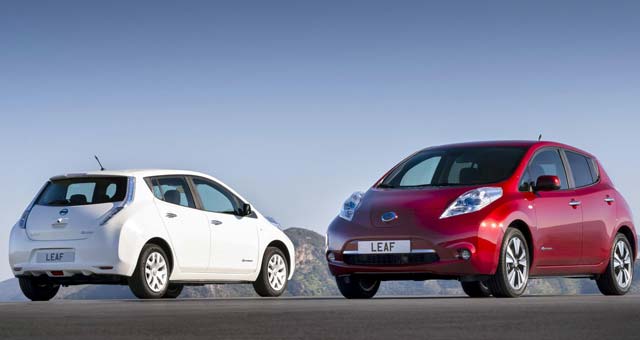 The next generation of UK-built Nissan LEAF has arrived – and for the first time, buyers can lease batteries for the 100% electric car and choose one of three trim levels.

Nissan LEAF cars bought with leased batteries will be known as ‘Flex’ models and buyers will be able to get behind the wheel of an entry-level Visia LEAF on that basis for £15,990 (after receipt of the Government’s £5,000 plug-in grant).

The separate battery lease payment ranges from £70 per month depending on the length of the contract and mileage covered.

The highest price anyone will pay for a LEAF is £25,490 (again, after receipt of the grant). This will be for a top-of-the-range Tekna LEAF, with the battery bought outright.

The new Nissan LEAF features more than 100 improvements over its predecessor – many of which were made as a result of feedback from Nissan’s active community of LEAF owners.

Most notably, the car’s range has been extended from 109 miles to 124 miles. And its battery is capable of recharging in about half the time of the first-generation LEAF.

The longer range has been achieved by improving the LEAF’s aerodynamics and its regenerative braking system and a more efficient E-powertrain. The real world range has also been improved with the introduction of a new heating system which is 70 percent more efficient through the use of a heat pump in the system.

The three trim levels available to UK buyers are Visia, Acenta and Tekna. All models have increased boot space because of the relocation of the charging point and an enhanced interior trim. There is a height adjust facility on both front seats and more foot space for passengers.

At the top of the range, Tekna features a BOSE energy-efficient sound system with a subwoofer and seven speakers. In addition, there are 17-inch alloys and LED headlamps.

Whichever route buyers choose to LEAF ownership, peace of mind is assured with Nissan’s enhanced battery warranty. The warranty on the previous-generation LEAF’s battery covered it against defective materials or workmanship for five years. The extended warranty also protects against capacity loss, with a commitment to repair or replace a battery which falls short of what might reasonably be expected.

Euro-spec LEAF will be built at Nissan’s Sunderland factory in the UK.

Prices after receipt of the plug-in car grant