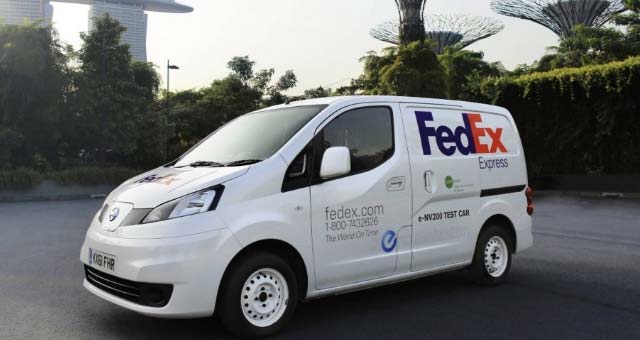 Nissan in cooperation with FedEx Express will carry out real-world driving tests of the e-NV200 electric van in Singapore.

During the field test, Nissan will provide FedEx Express with a monitor e-NV200 electric van for use as a delivery vehicle in the city for one month. After one month, the companies will evaluate the vehicle’s potential for the delivery of international air cargo. The results will be reflected in future development of the model.

This road test is part of the comprehensive field testing program announced jointly by the two companies at the Hannover Motor Show (Germany) last fall. The vehicle is scheduled to launch in 2014.

Upon completion in Singapore, the test program will be extended to other countries, such as Brazil and the United States. Prior to the joint announcement, the two companies had also tested the same model in the U.K. and in Japan. The two companies, both of which are strongly committed to improving the environmental impact of their operations, selected Singapore as the first field testing ground in this comprehensive program due to the country’s proactive stance in its environmental policies, including countermeasures against air pollution.

It also comes with an advanced performance that can only be achieved through the powertrain of the Nissan LEAF.

The e-NV200 provides exceptionally smooth acceleration and quietness, driving characteristics that are unique to electric vehicles, while keeping CO2 emissions zero at the point of use. The vehicle also displays great potential for use in various fields of business, with its advanced telematics system and power-supply function in the cargo compartment. Additionally, the model’s enviable cost of ownership—a priority for many companies—will be a highly attractive attribute when it competes in the commercial vehicle marketplace.

Nissan has already road tested the e-NV200 with several other major companies, including AEON Retail Co., Ltd., Tochigi Prefecture and FedEx Express in Japan, and British Gas and FedexExpressin Europe.