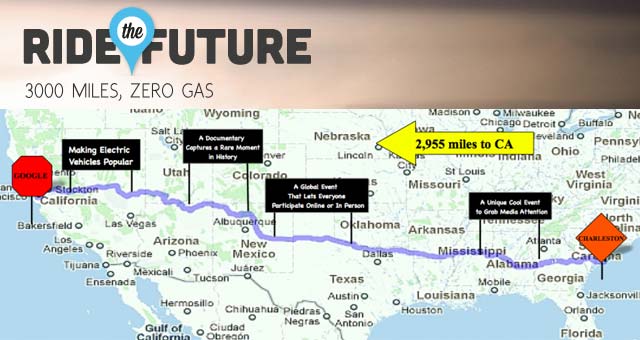 Soaring gas prices this summer will not red light an armada of electric vehicles green lit to set the Guinness World Record of Longest Journey on Electric Vehicles starting on July 4, 2013 from South Carolina to California.

For almost two years, Susan Jones of Xenon Motors has been assembling an electrical fleet that includes a scooter, motorcycle and automobile for not only conquering a world record benchmark but to battle the consumer pain from the pump and eradicate global gas emissions.

The record setting called “Ride The Future Tour” is projected to be accomplished in about 40 days and will end within feet of the Google campus in Mountain View, California. To break the record, only one driver per vehicle will be allowed to start and complete the coast-to-coast journey.

So far in 2013, there have been more days of gas price increases than reasonable price stabilization. Susan Jones’s vision is to show America that there are cheaper ways to travel nationally and locally. Her mission is to show every major city from coast to coast alternatives to gas vehicles and save money over time. All record setting vehicles in the tour will be 100% electric.

The electronic highway trail will have a very “Forrest Gump-like” flash mob feel. Thousands of eco-friendly enthusiasts will be joining the tour because of a massive social media campaign and celebrity-led endorsements.

The tour plans to personally meet dozens of local, state and national elected politicians to make them more aware of alternative energy means of transportation. At every city stopover, there will be a “Town Party” that will allow locals to test ride each type of vehicle.

The tour will be live streaming on G+ Hangouts and vlog posted onto Youtube.com.