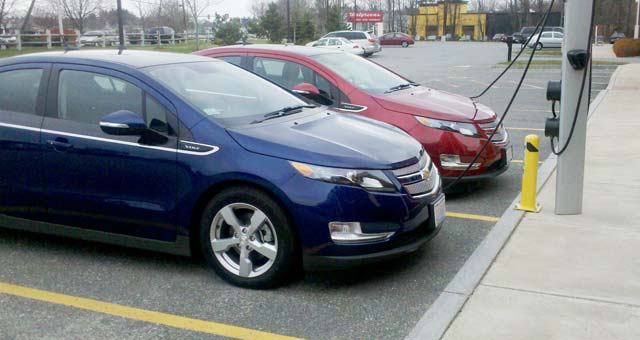 ChargePoint has installed the first of more than 80 electric vehicle charging stations it will install around New York, through a $1 million incentive from the New York State Energy Research and Development Authority (NYSERDA).

The Solaire, developed in 2003 by the Albanese Organization is the nation’s first LEED Gold-certified residential building. ChargePoint is the largest network of EV charging stations in the world, with more than 11,000 charging spots installed.

“Through Governor Cuomo’s ‘Charge NY’ program, the state is taking a proactive approach to investing in an EV infrastructure that will encourage New Yorkers to transition from less efficient vehicles to electric vehicles”

Last year, Governor Cuomo announced $4.4 million being awarded to 10 EV companies, municipalities and other entities, including ChargePoint, to bring 325 charging stations to New York. Earlier this year, Governor Cuomo announced Charge New York, a new initiative to promote EVs through investing $50 million over five years. The program calls for investment in 3,000 public and workplace charging stations by 2018, plus other steps meant to encourage the growth of electric vehicle ownership.

New York City Mayor Michael Bloomberg has announced a plan to make up to 20 percent (or 10,000 spaces) of new New York City parking spaces EV-ready over the next seven years.

ChargePoint is the leading provider of EV charging in New York City with nearly 200 EV charging stations already installed. ChargePoint has worked with private garage owners and commercial hosts to pilot Level 2 charging throughout the state of New York.

“Upgrading the city’s EV infrastructure to new, universal ChargePoint chargers is imperative to the future success of a sustainable society. By working with ChargePoint and NYSERDA to bring new chargers to our LEED-certified rental properties in Manhattan, The Solaire, The Verdesian and The Vanguard Chelsea, the Albanese Organization hopes to inspire more drivers to consider electric vehicles, while providing current adopters with new access to convenient charging locations,” said Russell Albanese, Chairman of the Albanese Organization. “The partnership of ChargePoint and NYSERDA has been an excellent example of the public and private sectors working together to make a great contribution.”

“Through Governor Cuomo’s ‘Charge NY’ program, the state is taking a proactive approach to investing in an EV infrastructure that will encourage New Yorkers to transition from less efficient vehicles to electric vehicles,” said Francis J. Murray Jr., President and CEO, NYSERDA. “Given the amount of emissions produced by the transportation sector, this statewide EV infrastructure will allow the state to reduce its dependence on fossil fuels and cut down on greenhouse gas emissions.”