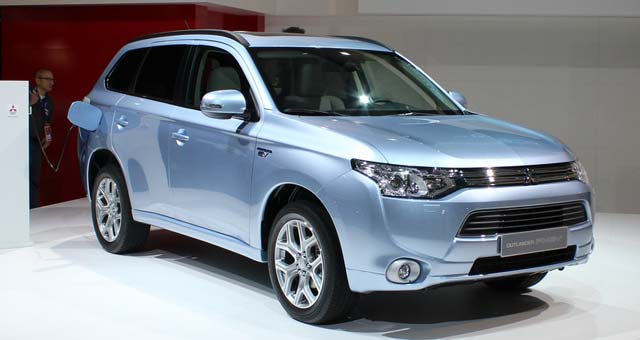 Mitsubishi Motors Corporation (MMC) announced that the new Outlander PHEV, the world’s first plug-in hybrid SUV, will go on sale at dealerships throughout Japan from January 24, 2013.

The Outlander PHEV qualifies for Japan’s “eco-car” tax incentives and the Ministry of Economy, Trade and Industry’s “Subsidies for measures designed to promote introduction of clean energy vehicles” (maximum ¥430,000), making the actual cost to the customer as low as ¥2,894,000 (about $33,670). For comparison, the manufacturer’s suggested retail price of the Toyota RAV4 EV is $49,800 before a federal and state incentive of up to $10,000.

After the Japanese launch, the Mitsubishi Outlander PHEV will become available in Europe and North America.

The world’s first plug-in hybrid SUV, the Outlander PHEV represents a fusion of the EV technologies developed by MMC for models such as the i-MiEV, 4WD technologies honed in the Lancer Evolution, and SUV know-how gained from the Pajero (Montero or Shogun in some countries). The result is a groundbreaking new model that brings together the superior environmental performance and quietness of an EV, the stability and handling of a 4WD, and the practicality of an SUV, so that the driver can enjoy the benefits of:

– Environmentally-friendly all-electric operation for everyday use and mainly motor-powered hybrid operation for longer journey
– Outstanding motive performance from its Twin Motor 4WD System
– Unique functionality made possible by the high-capacity battery, including 100V AC power supply capable of delivering up to 1,500W of electricity as an external power source and Battery Charge Mode which allows the battery to be charged by the engine either when stationary or on the move[wzslider height=”400″ lightbox=”true”]The Outlander PHEV will be available in five trim levels: the base G, the G Safety Package fitted with MMC’s “e-Assist” (Japan-market name) advanced safety technology system, the G Navi Package, which comes with on-board navigation and other features, the G Premium Package, which features a RockfordFosgate Premium Sound System and leather-upholstered seats for extra comfort, and the built-to-order E.

MMC has made state-of-the-art safety technology more accessible for anyone who wants the Outlander PHEV. The acclaimed e-Assist advanced safety technology package – now installed in over 80% of new Outlander models in Japan – is available as standard equipment from the trim level of G Safety Package and higher, for a difference of as low as just ¥95,000 (about $1,100) over the base G.

The Outlander PHEV’s unique combination of electric motors and gasoline engine give it amazing flexibility in optimizing fuel efficiency and environmental performance while providing a long cruising range. For example, on electric power only, the Outlander PHEV has a cruising range of 60.2 km (37.4 miles) measured via Japan’s JC08 mode, enabling it to function entirely as an EV in most everyday situations. It also has a total cruising range on a par with internal combustion engine (ICE) vehicles with 897 km (557 miles) at JC08 mode, making it perfectly suited for uses traditionally associated with SUVs, such as long-distance travel and outdoor and leisure activities.

The optimum drive mode for comfortable and fuel-efficient driving is automatically selected depending on driving conditions and remaining battery charge. Gasoline consumption is minimized by actively utilizing electric power, keeping the gasoline engine in its most efficient range, and by recovering energy during deceleration via regenerative braking. This results in a plug-in hybrid fuel efficiency (combined fuel efficiency) of 67.0 km/l (about 157 miles per gallon equivalent) and hybrid fuel efficiency of 18.6 km/l (44 mpg), both at JC08 mode.

The vehicle has three drive modes: EV Drive Mode is an all-electric mode, Series Hybrid Mode where the gasoline engine operates as a generator supplying electricity to the electric motors and Parallel Hybrid Mode where the high-efficiency gasoline engine provides most of the motive power, assisted by the electric motors as required, such as when more powerful performance is required to accelerate or climb a slope.

The 100V AC power supply (1,500 W) can produce up to 1,500W of 100V alternating current from dual interior outlets to power all kinds of appliances for outdoor leisure use and in emergencies. These can provide roughly one day’s worth of power for ordinary home appliances and up to around 10 days’ worth when power generation by the engine is factored in (factory option on all except E models).

The battery can be switched to Battery Charge Mode, which allows electricity to be generated by the engine and stored when stationary or on the move (giving 80% charge in approximately 40 minutes when stationary) and Battery Save Mode, which maintains charge while driving. Stored electricity can be used in EV Drive Mode at the destination or used to power appliances.

Plug-in Hybrid EV System
The Plug-in Hybrid EV System was developed based on the EV technologies used in the i-MiEV and MINICAB-MiEV for use in mid-size and larger passenger cars that require longer cruising ranges. Key components such as the battery and motor are constantly monitored, and integrated control is maintained over the engine, Twin Motor 4WD, regenerative brakes, air conditioning, and so on to ensure safe, comfortable, and fuel efficient driving.

The drive battery is a high-capacity lithium-ion battery developed for the PHEV System based on the technology used in the i-MiEV and MINICAB-MiEV (16.0 kWh models). It consists of 80 cells mounted in series housed in a battery pack enclosed in a secure frame, and has a total voltage of 300V and total storage capacity of 12.0 kWh.

Smaller, lighter, higher output versions of the permanent magnet synchronous motors used in the i-MiEV and MINICAB-MiEV are located front and rear. These have a maximum output of 60 kW each and maximum torques of 137 N･m (front) and 195 N･m (rear), and deliver high torque and power from takeoff.

The 4B11 2.0-liter inline-four gasoline engine functions solely to generate electricity in Series Hybrid Mode and is mainly used to provide motive power in Parallel Hybrid Mode. It is fitted with MMC’s MIVEC technology, which keeps the engine in optimal efficiency ranges by continuously varying the timing of the air intake valves according to engine speed in Parallel Hybrid Mode. Additionally, exhaust noise has been reduced and the engine room soundproofing increased in order to ensure the vehicle remains as quiet as EV Drive Mode, even when the engine is in use.

Exterior
The Outlander PHEV features a specially-designed front upper/middle grille and rear combination LED lamps with clear lenses, while the bumpers and lower body come in the same color as the body for a modern, urban look.

Machine-polished 18-inch aluminum wheels (exclusive to the Outlander PHEV) are employed on all except the E trim level.

The new Outlander PHEV is offered in a choice of four body colors, including a new Technical Silver Metallic, a unique color with an air of translucency developed specifically for the Outlander PHEV to go alongside Black Mica, Titanium Gray Metallic, and White Pearl.

Interior
The interior retains the sophisticated, comfortable feel of the gasoline Outlander. All except the E trim level feature a new crystal fiber-like dashboard and door trim ornament panel that impart a modern-looking refined feel.

The easy-to-read high-contrast meters now include a power meter that shows at a glance how much energy is being used and recovered. The high-definition color LCD multi-information display system, which provides access to a range of e-Assist and eco-driving support data and route guidance information linked to the car navigation system (in models equipped with MMCS), now displays vehicle energy flow data.

The selector lever is a futuristic-looking joystick with an electric “parking switch” that locks the lever.

Like the Outlander ICE variants, the Outlander PHEV comes with an “ECO Mode” switch that controls electricity and fuel usage for increased efficiency at the touch of a button and an ECO Driving Support System Display system that shows just how much energy is being saved on the road.

Although the new model comes with the new PHEV system, it offers practically the same interior comfort and luggage space as the Outlander ICE versions with five occupants. The 60/40-split second row seats use a double-action folding mechanism which allows the user to tailor the seating layout more flexibly and easily to passenger and luggage requirements.