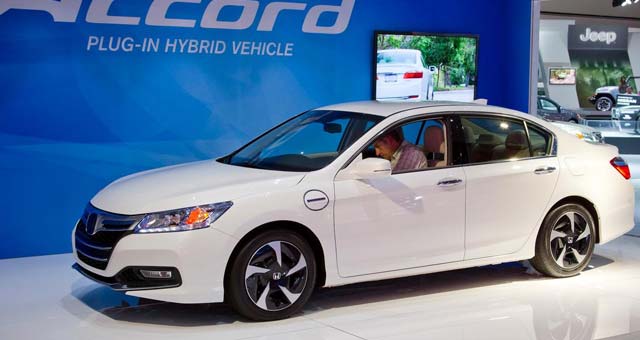 The Air Resources Board has approved the 2014 Honda Accord Plug-in Hybrid as the first car for sale in California that meets ARB’s most stringent smog-emission standard to date.

The 2014 Honda Accord Plug-In Hybrid produces only 20 milligrams of combined smog-forming emissions per mile, which makes it the first gasoline-powered car in California to meet what is known as the SULEV20 standard, the most stringent in the nation and one-third cleaner (in terms of smog-forming pollution) than the previous lowest state standard.

In addition, the 2014 Honda Accord Plug-In Hybrid has lower greenhouse gas emissions than the fleet average standard required by all cars in 2025, the equivalent of a 50-percent reduction from current required levels.

“Once again, Honda is the first to comply with ARB’s most stringent standard,” said Tom Cackette, ARB’s Deputy Executive Officer and head of the mobile source program. “Honda has demonstrated that a dedicated commitment to the environment and advanced engineering at every level of the company can deliver the cleanest cars well ahead of schedule.”

The Executive Order allowing Honda to sell the newly certified ultra-clean cars in California was signed on December 21, following a detailed examination of emissions and performance test results. Honda began production of the car that same day.

As a result of the advanced technology in its design, the 2014 Accord Plug-In Hybrid achieves 124 MPGe city/105 MPGe highway in hybrid mode, and 47 MPG city/46 MPG highway in standard (gas only) mode.

The Accord Plug-in Hybrid can be fully charged from a low-charge indication point in less than three hours using a standard 120-volt household electrical outlet, and in less than one hour using a 240-volt “Level-2″ charger. The free HondaLink EV smartphone application will allow owners to easily monitor the charging state of the Accord PHEV.

The low emissions standards that this Honda model meets are part of the state’s Advanced Clean Cars package of regulations, adopted in January 2012, that will ensure increasingly cleaner cars for sale in the state, and provide for increased choices of zero-emission vehicles.

When fully in force in 2025, the new set of standards will reduce smog-causing pollutants from low-emission vehicles 75 percent from current levels, and greenhouse gases by 34 percent. This will result in less overall vehicle emissions and cleaner air, along with more efficient cars that will ultimately require less fossil fuel to operate. The new requirements will save California drivers $5 billion in operating costs in 2025, and $10 billion by 2030 when more advanced cars are on the road.