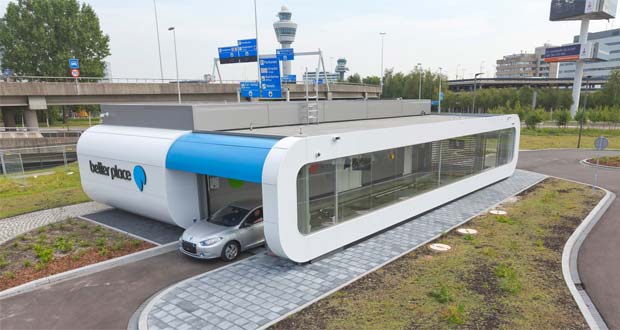 With 10 electric taxis and one battery switch station in operation, each taxi is driving close to 600 electric kilometers on a single day.

More than 4,000 trips totalling 135,000 electric kilometers have been made since the project started in September, demonstrating that high usage vehicles such as taxis on the heavily travelled Amsterdam – Schiphol corridor can go fully electric when supported by an integrated network solution. The pilot is on track and expects to deliver more than 80,000 electric kilometers per taxi per year.

“The initial results prove that our model offers the convenience from the world’s most demanding customer segment – taxi drivers – and the response has been overwhelmingly supportive,” said Jelle Vastert, Director of Business Development, Better Place Netherlands. “Our partners and our customers have helped to make the project a true success, and we remain committed to bringing the model to fleet owners and private customers as soon as we can.”

The electric taxi pilot at Schiphol is part of a larger project to decarbonize road transport that was partly funded by the Trans-European Transport Network Executive Agency (TEN-T EA), an agency of the European Commission. The entire project is supported by an EU grant of almost €5 million issued through the TEN-T program.

The TEN-T agency named the Better Place initiative as one of the agency’s “10 (more) out of TEN” campaign highlights for 2012. The 10 projects are a sample of successfully implemented projects selected for their positive impact in supporting the completion of the TEN-T network, sound project management, attention to budget, and good working relationship with the TEN-T agency.

The project “Greening European Transport Infrastructure for Electrical Vehicles” – led by Better Place and backed by a coalition of industry, public and research partners – is anchored on an innovative electric taxi project in Amsterdam coupled with intermodal transport of an integrated electric car charging and battery switch network with railway services in Copenhagen.

In Denmark, Better Place now has 17 out of 18 battery switch stations along with a network of charge spots available for customers. The Better Place charge and switch network enables Danish drivers to drive anywhere across the country in an electric car.

The value of the Better Place charge and switch network is seen in customer Net Promoter Scores that exceed 80%, which tops the industry standard for customer satisfaction of their preferred personal transportation choice.

Currently, the European Union spends €160 billion annually (excluding taxes) to fuel its passenger cars. By 2020, more than 90% of the region’s oil will be imported. The European Council and the Parliament are currently negotiating the next step toward financially supporting infrastructure for alternative fuel infrastructure, including charging electric cars under the CEF (Connecting Europe Facility) program. These funds can help shift European expenses away from imported oil and toward European companies that support the electrification of transport and integration of renewable energy, which reduces oil consumption and greenhouse gas emissions while creating EU jobs.

Better Place is backed by a world-class group of investors that are fully dedicated to the company’s long-term success and view Better Place as a long-term, transformational investment in their portfolio. The company has raised more than $850 million of financing to date including a recent $100 million of new financing.