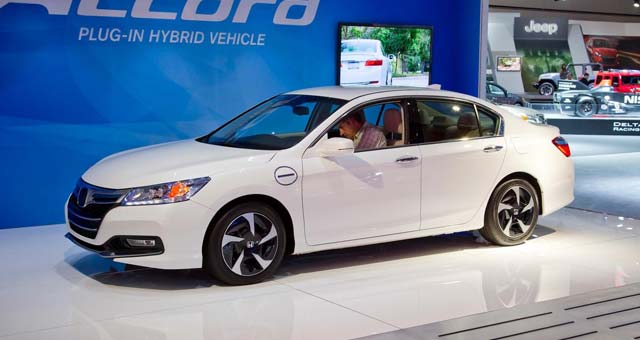 The Boston Common Garage (BGC) and Zipcar announced the introduction of four new 2014 Honda Accord Plug-in Hybrids to Zipcar’s Boston fleet, as well as plug-in stations and priority parking for Zipcars and other hybrid vehicles at the.

The new “green zone” on the BCG’s middle level is part of an ongoing effort by the Massachusetts Convention Center Authority – which owns and operates the garage – to create one of Boston’s most environmentally friendly public parking facilities.

Zipcar is a longstanding pioneer in using advanced vehicle technologies as the first car sharing company in the United States to introduce electric vehicles, starting in Boston in 2002. Zipcar is also the first to offer hybrid vehicles through a partnership with Honda in Seattle in 2003. Zipcar’s strong innovative history joined with the MCCA’s broad reach in Massachusetts provides members with access to new advanced technology and more alternate fuel vehicles, both ranked highly by members in recent surveys.

The BCG’s new green parking area is branded and just feet away from the facility’s entrance and exit ramps. Signs from the Charles Street entrance will lead drivers to the area, which is restricted to Zipcar hybrid or plug-in, or privately owned, vehicles. In addition, the BCG is branding priority parking spots for hybrids near each of the garage’s four entrances to Boston Common. The charging stations were funded through a U.S. Department of Energy grant.

Zipcar currently has four Honda Accord Plug-in Hybrid vehicles available in Boston: two at Boston Common Garage, one at Post Office Square Garage and one on the Harvard University campus at Garden Street and Fernald Drive. The plug-ins are available to all Zipcar members ages 21+, starting from $11.25 per hour.

The Honda Accord Plug-In Hybrid battery can be recharged in about three hours when plugged into a standard 120-volt electrical outlet, and in less than one hour using a 240-volt “Level-2” charger.