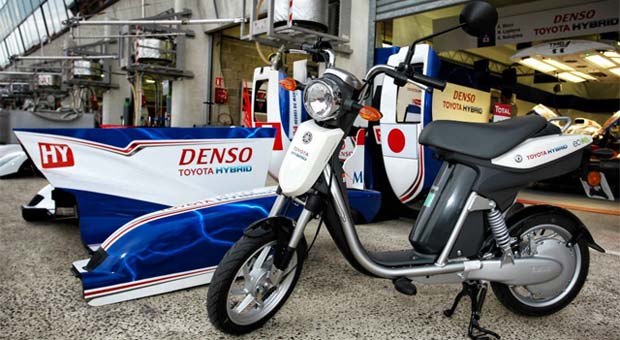 Yamaha Motor Europe will bolster Toyota Racing’s green presence in the 2012 FIA World Endurance Championship through the provision of 16 EC-03 electric scooters for paddock use.

Yamaha’s scooters will join Toyota Racing as they participate in the 2012 FIA World Endurance Championship, the first race being the legendary 24hrs race in Le Mans, France on the 16th-17th June 2012.

In 2002, Yamaha Motor became the first manufacturer to market a production-model electric commuter, the Passol, as a minimal commuter vehicle designed to play a role in next-generation urban transportation. This was followed in 2005 by the Passol-L and the EC-02. The new generation EC-03, launched in Europe in 2011, has been developed as a “personal commuter” vehicle that is expected to find many diverse uses in the future: from short-range urban commuting to rental vehicles in tourist areas. For Yamaha Motor, this model is a realization of the company efforts to develop new forms of “Smart Power”.

With a low environmental impact, the EC-03 provides a fun, convenient way to get around town and around the paddock completely emissions-free. With virtually no running costs the ultra efficient scooter can be conveniently charged from a normal plug socket for just a few euro cents.[wzslider height=”400″ lightbox=”true”]