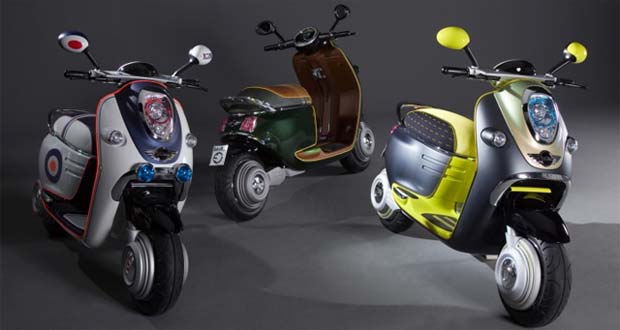 BMW has released first official images of the MINI Scooter E concept which will be formally unveiled at the 2010 Paris Motor Show next week.

The three electric scooters on are mechanically identical to one another, but each is given a unique visual personality.

Like the smart eScooter, MINI Scooter E Concept is powered by an electric motor integrated in the rear wheel. Exact details aren’t planned to be revealed until it debuts in Paris, but officials confirm that power for the motor is supplied by a lithium-ion battery which can be recharged at any conventional power socket using an on-board charging cable.

When riding the MINI Scooter E Concept, brief stops can be used to top up the on-board energy storage system. Consistent charging significantly increases independence and flexibility when using the electrically powered two-wheeler. The electric drive unit, concealed beneath a painted cover inside the rear wheel, is powered by electricity supplied from a lithium-ion battery.

Apart from the compact battery, a charging system and connecting cable are integrated snugly in the rear of the MINI Scooter E Concept. The charging cable has a plug which fits into any conventional domestic socket. This has the major advantage that topping up the energy reserve does not depend on a special charging station being available. Stop-offs for shopping or visiting a café can be used for hassle-free battery recharging.

Plugs and cables are accommodated underneath a cover similar to the round tank flap in a MINI car. After opening the illuminated flap, the plug and charging cable can be pulled out to a length of up to five meters and connected to the power system. After the battery has been charged up, a button-operated spring mechanism ensures that the cable is retracted and coiled in a space-saving compartment.

The instrument panel has a center speedometer, like the Mini, but with a smartphone clip in the middle. The actual speedometer is a tube around the rim filled with fluid that expands like the mercury in a thermometer as the speed rises.

While the scooter is in motion, the smartphone can be used as a navigation system, music player or telephone as required. A wireless Bluetooth interface can be connected to a helmet from the MINI Collection. This is fitted with a microphone and headphones so that riders are able to use the telephone function or access their personal music collection while on the road.[wzslider height=”400″ lightbox=”true”]