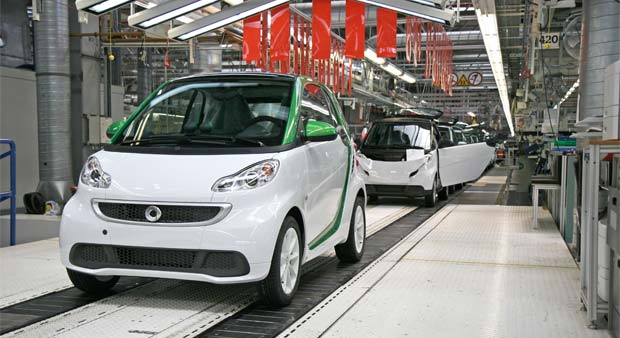 German automaker Daimler has started series production of its smart fortwo electric drive at its plant in Hambach, France.

Daimler says it has invested more €200 million to upgrade the site and secure itself pole position in the electric car field against its European rivals.

“The new smart fortwo electric drive and the expansion of the Hambach plant are two important milestones for the future of smart”, said Dr. Annette Winkler, Head of smart. “With the new smart electric drive we are further expanding our leading position in urban mobility and making fully electric driving accessible to everyone. For this – and for the successor generation to the current smart – we are making significant investments in the Hambach site. And I am convinced that this is money extremely well invested.”

Delivery in Germany starts in late summer, all other markets—a total of more than 30—will follow successively.

With the launch of the new smart fortwo electric drive, in future smart customers can enjoy even more fun at the wheel of an attractively priced vehicle that has the familiar compact dimensions – as a coupé or a cabriolet.

With its 55kW electric motor the smart fortwo electric drive accelerates from 0 – 60 km/h (0-37 mph) in 4.8 seconds, and with a maximum speed of 125 km/h (78 mph) driving pleasure is also guaranteed on urban motorways. The 17.6 kWh battery enables the urban two-seater to travel approximately 145 kilometers (90 miles) in city traffic without producing any local emissions.

As those components each come from joint ventures with the German companies Bosch (EM-motive) and Evonik (Deutsche ACCUmotive) and as the vehicle is built in the plant in Hambach (France), the new smart fortwo electric drive is the first true European electric car.

Prices in Germany (including 19% VAT):

The smart plant in Hambach was inaugurated in 1997 and has produced the smart fortwo since 1998 – in its second generation since 2007. In 2011 more than 103,000 vehicles rolled off the production line. Approximately 1,500 people work at the site, consisting of about 800 employees at the plant itself and a further 700 at the seven local system partners.

The one millionth smart fortwo was built in September 2008, coinciding with the tenth birthday of the brand. To date more than 1.3 million vehicles have left the plant.