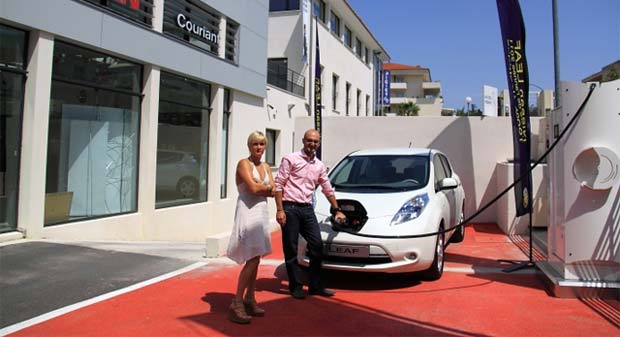 Nissan delivered its first mass produced electric car, the Nissan LEAF, to customers in the France.

Carine and Phillip Gerbaud got handed the keys to their white Nissan LEAF at NISSAN COURIANT in Aix-en-Provence on August 2nd.

Carine Gerbaud will mainly use her Nissan LEAF for daily commuting to her workplace. As she drives 80km per day on average, the Nissan LEAF’s homologated range of 175km with a full charge is sufficient to cover her needs.

Philippe Gerbaud said that their decision to buy an electric vehicle was not only to “preserve the environment” but also driven by the particularly low running costs the Nissan LEAF offers: less than 2€ per 100 km in France compared with about €7 for a similarly-equipped diesel family car.

The price of the 100% electric Nissan LEAF is €30,990 in France, after incentives and including the batteries which benefits from a five-year/100,000 km warranty. The French government’s incentive for electric vehicles amounts to 5,000 euros. In order to make electric motoring even more accessible to individual customers in France, the Nissan LEAF is also available through a private finance scheme.

Deliveries of Nissan LEAF have already begun in the UK, the Netherlands, the Republic of Ireland and Portugal. Order books have also opened in Switzerland, Spain, Belgium and Norway with customers in those markets expected to start receiving their cars shortly.

Nissan LEAF recently received a top 5-star safety rating from the European New Car Assessment Programme (Euro NCAP), making it one of the safest cars on the road in Europe.