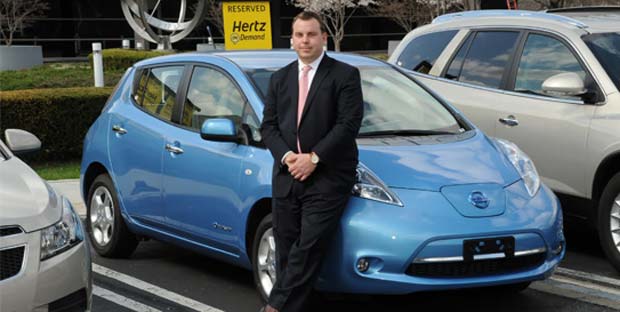 Hertz On Demand, Hertz’s global car sharing club, has signed a Memorandum of Understanding (MoU) with Chargemaster plc, a supplier of electric vehicle charging solutions, for the launch the operation of an electric vehicle car share scheme in Oxford, England.

The program is designed to appeal to residents, visitors, and business people, who will be able to reserve and drive a conveniently located electric vehicle by the hour, day or week from http://www.hertzondemand.co.uk.

The hourly rates will start from GBP5 and include in-car access to the Member Care Center, insurance, roadside assistance, maintenance, and cleaning. Membership in Hertz On Demand is free and will entitle members to use the operator’s other car clubs in the US, Europe and China.

The plan is that initially ten Nissan LEAF EVs will be available and situated in university campuses, street locations, station car parks, major employers’ car parks and other strategic locations across the city and surrounding areas.

The club cars will be recharged via the POLAR charging network for Oxford, which has 32 charging points operating in key locations throughout the city, with another 28 under construction. The charging network is supported by the Oxford Electric Vehicle Partnership (OEVP) led by Oxford Brookes University.

The Oxford charging network is part of the national electric vehicle charging infrastructure known as POLAR, and currently being rolled out by Chargemaster Plc.

In related news, Hertz has announced that Hertz On Demand and IBM are together piloting a program in Germany to advance electric vehicle (EV) mobility and user adoption through intelligent recharging solutions.

In a special agreement, Hertz On Demand in Germany will supply electric vehicles to the car share fleet used by IBM employees to drive between Stuttgart Airport and the company’s campus in Ehningen, about 30 km away.

Initially the electric cars provided by Hertz will be charged using decentralized generation of electricity on the IBM campus. The charging stations will be operated with intelligent IBM software that optimizes the usage of generated power by renewable energies. Furthermore, the software balances demand and availability of electricity power to prevent load peaks.

The companies are using this program as a field test to gauge acceptance and practicability of the electric vehicle and the intelligent recharging infrastructure usage. Upon success of the pilot program, they intend to add further electric vehicles to the Ehningen campus, as well as to extend the project to other IBM sites.

Discounted rates have been available to IBM staff since October 2011 as part of the special car sharing agreement in place between the IBM campus in Ehningen and Stuttgart Airport. From April, IBM’s frequent flyers will have one electric car at their disposal, with numbers increasing as the year goes on. The cars can be booked quickly and simply through the Hertz on Demand website using the IBM account.